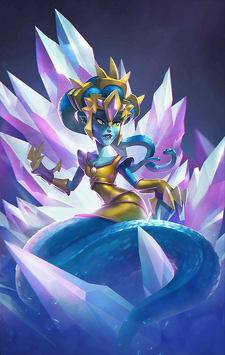 Zola was introduced by the "Gorgon Zola" event on January 16, 2019. She is the 3rd Gorgon sister in Dungeon Boss.

Viperia doesn't care. She loves to smash them all.

Fast when she is on team with

Her signature attack is

Icy Glare, an AoE attack that hits all enemies. This attack has a chance to freeze or stone the enemies. The result is random. The

Shrouded are ineffective and don't protect the victim. Only Constructs are immune to the effect.

Zola can cast a terrifying tornado infested by snakes: A

Water damage and floods the survivors with Venom.

When Zola reached her final Ascension she can use

Serpent Strike. This is a foot sweep attack that steals all buffs from the target and has good chances to leave the target

The oldest and most devious of the Gorgon sisters,

Zola let her sisters pass through the Portal before her to pave the way for her new rule. She's come to lay waste to the enemies of the reptile's might. Known to turn foes to stone and freeze them in their tracks at a glance,

Zola is a deadly foe.

Statues and ice sculptures made by Cobressa and Zola