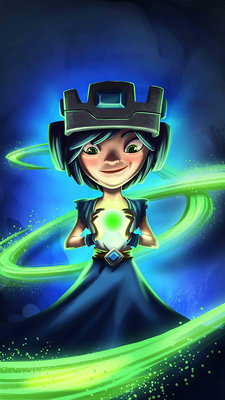 Yasmin Bloom is most likely the first healer you will unlock in the game, however she is a fairly powerful character in her own rights. Yasmin isn't very helpful until she is ascended once and gains Cure Wounds, but once this happens she becomes a very effective healer. Her second ascension is quite powerful too. Once you have her ascended once, a mixture of ascending and increasing stars will improve her healing abilities. The other main option for a healer is Chief NubNub, who many players consider to be better then Yasmin, however Yasmin does have a few advantages. The main two being that all three of her powers can heal, compare to NubNub's one, and due to PWN Undead, she can pack more of a punch too.

Yasmin's role in a team is simple. She is a healer and healing is what she does. However, she can also hit Undead fairly hard, thanks to her PWN Undead passive trait. She also can gain the magical trait, which makes her tougher against some enemies and Water Heart, allowing her to buff the health of water allies.

Team Mend is Yasmin's first power, and it is quite simple. It heals the whole team a little bit of health. This power is best saved for when most or all of your team are wounded, but not in serious danger yet. Of course it should always be used in emergencies as well. This power is very effective when combined with CRIT buffs. Ekko's energize or Black Diamond's Assassin's Wrath make Team Mend capable of fully healing a whole team.

Cure Wounds is a powerful healing ability, that greatly heals a single target and removes one Debuff. This power is very effective, and works especially well if you have a Taunter. The healing is great for very wounded allies, and if there is a particularly dangerous Debuff on an ally, such as King Yorick's Marked for Death, Cure Wounds can be used to remove those Debuffs too. Again, a higher CRIT chance will see more use out of this power.

Aegis Shield is a nice bonus that is in no way needed for Yasmin, but still helpful to have around. The power creates a shield that takes all the damage of the next attack and heals the target slightly. This power works well with Taunters against hard hitting enemies, or also as a backup if you've run out of all your other healing and desperately need some protection for a very weak character. It can also be used to heal a character just a slight bit, not needed, but helpful, and the shield is just a bonus.

Yasmin is also one of the best healers for a Taunter. Regardless of who it is, Aegis Shield and Cure Wounds both are very effective for taunters. Team Mend can be used for the one turn the Taunt runs out, or it if is somehow purged.

Yasmin's Water Heart also make her very useful in an all water team. This buff gives all water allies a Health boost, so it aids with people who are quite weak on a health level, like Indigo or Selwyn the Enduring, or heroes who can become very tough will it, like IGOROK and Yokozuna. Yasmin's Water Heart and Sir William's Water Guard make for a very tough all water team, and the two of them can do most things and only really require a damage dealer, like Samurai Takumi or Icebloom.

Yasmin Bloom is a common sight at low level defenses, but she will gradually fade at higher levels, either replaced by more damage dealers or NubNub. Yasmin in both defense and attack standards can be helpful, but her lack of great defense makes her an easy target for characters like Willow Swift, Tsume and Bovus El Doro. Yasmin will work best with an all water team. Combing her with Sir William, and then two water characters of your choice will make an effective, hearty team for PvP. Icebloom and Yokozuna or Indigo and Stone Fist are two good examples of this. 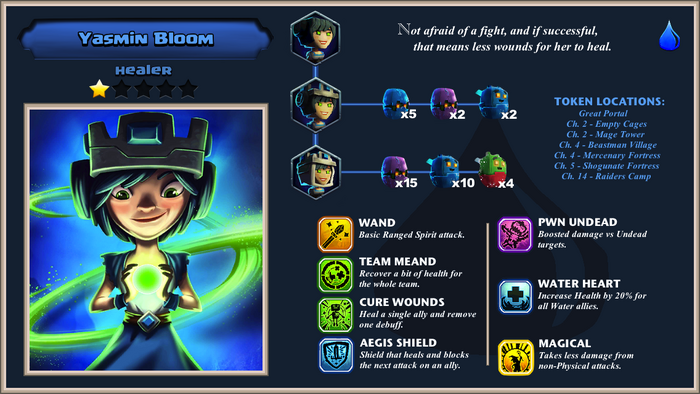