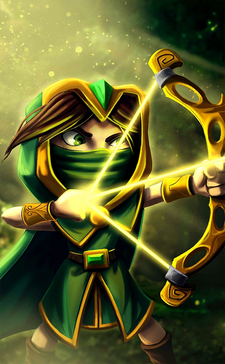 A combination of ascending her and raising her star level will increase the damage output of her attacks, which can ultimately one-shot heroes. Her passive

Willow Swift's primary objective is to deal as much damage as possible in a short period of time. Her

Fast passive ability gives her the chance to start first, giving her the advantage of attacking at least once before a retaliation. Her

Sniper Shot, which ignores armor, deals a significant amount of damage to anyone that isn't Fire based. It can away strip away an enemy buff like Taunt, which could help your party kill off another enemy with very little life.

Evasive Shot deals a lot of damage too, while giving her an immediate benefit of dodging subsequent attacks. Should she survive her first round of attacks in a PvP defense, then her follow up skill

Evasive Shot will increase significant her survival rate for subsequent attacks. Of course, this ability is very helpful for Boss fights in Dungeons.

Arrow Barrage is an icing on the cake and is mostly used in larger groups of Enemies. It deals relatively little damage compared to her other single-targeted skills. However, it will quickly dispatch a lot of Water based enemies or enemies with very little health.

She works very well with other heroes using area of effect (AOE) attacks.

Black Diamond is one example with an AOE that works by reducing the entire enemies' team life, and Willow Swift quickly dispatching the rest of them.

In addition, other heroes with passives affecting Nature Heroes such as Tsume's

Stout Team skill will greatly enhance the strength of an all-Nature team. Adding

Tsume will undoubtedly push the damage of

Sniper Shot to devastating levels, ensuring that she will one-shot a hero. Using

Rocky the Shiitake will guarantee a critical hit from each of her skills. In addition, her own

Nature Heart passive will increase the health of other Nature allies, giving heroes like Bovus and other hard hitting warriors an even greater chance in survival.

Pairing her up with another hard hitting Fast hero like

Shadowblade will help your team eliminate a hero that is considered dangerous to your team.

Willow Swift is a common defender of the game. She not only provides a first turn attack with a

Sniper Shot, but she also acts as a common target for the AI to take out almost immediately. When used as a defender, keep in mind that her job is to target one hero and unleash her

Sniper Shot. If thinking in terms of exchanging blows within the fight, then her job is successfully completed if she successfully launches off her first attack. Have a reason to add her into your party-pair her up with Shadowblade if your job is to eliminate a specific hero like

Bovus El Doro. If you intend to attack

Tsume, then make sure that you can eliminate him before his 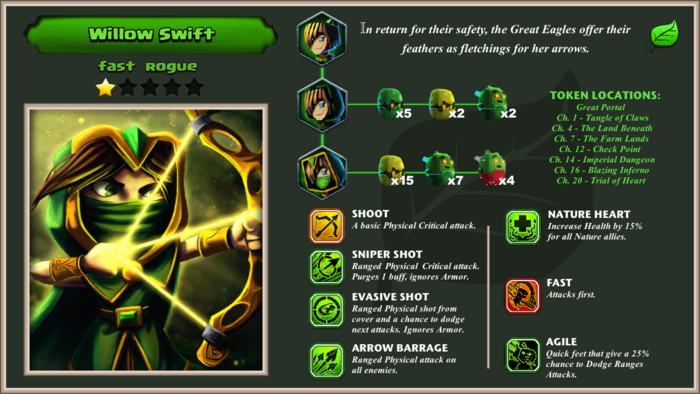 Elf Willow (Skin): on the left fully ascended, and on the right first Ascension look
Community content is available under CC-BY-SA unless otherwise noted.
Advertisement