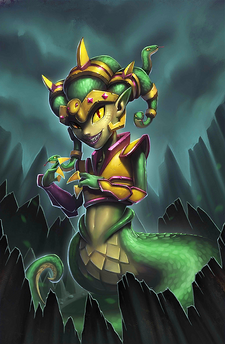 The ancient rulers of the land,

Cobressa have come through the portal on 27th April 2016 during the Gorgon Sisters event. Over two years later their sister

Viperia uses Venom to boost damage against enemies with her

Stone Fist. Why does Viperia also hate Stone Fist you ask? Well she has never really had a thing for stonework like her sister but she has always secretly enjoyed smashing her stone statues. Don’t worry

Cobressa has never minded she has a very large collection and it is ever growing.

There is a Snake in My Dungeon!

The Gorgon Sisters Event: How to beat "Gorgon Lair (VH)"