Upgrading Heroes involve the increase of its basic stats like Health (HP), Attack (ATK), Defense (DEF) and its general toughness in dungeon fights and Dungeon Raids (PvP). This is done by collecting

Quests. The collected tokens result in an increase of

Hero Stars boost the base stats of your

Heroes. Your hero can have up to 6 stars (★★★★☆☆), and each additional star increases the stats even a little bit more than the previous one. With six stars the Hero gets a 100% bonus. We'll see exactly how this works in a moment. First let's see a few more ways to make heroes stronger.

More ways to upgrade your Heroes are...

Level
Of course, leveling up your heroes. For this you need to run Dungeon with your

Heroes and get some

XP Potions that you find in Dungeons, too.

Ascensions
If you are looking for a way to get more Abilities, more Special Attacks, and unlock powerful Traits for your Heroes, then check out the Ascension page. That's another way to gain more power.

Runes are shiny and something like the gear of your heroes. Don't let them go naked into Dungeons, boss! Check out the Runes page!

Epics
Your most powerful, favorite heroes can do even better if you get them an Epic weapon. Well, not all your heroes wield a weapons. That's why we call this mighty upgrade Epics.

Hero Rarity
The Hero Rarity is preset and cannot be upgraded. But it should be mentioned here because it affects the strength of your heroes, including Hero Power. Maybe you also wondered why some hero tokens look different? It's because of the Hero Rarity.

In the campaign map, there are token portraits of each hero available in the game. Clearing the dungeon will reward the adventurer anywhere from 0-3 Hero tokens. By collecting enough of a specific type of Hero token, the adventurer can unlock new heroes and even upgrade its star rating. Once a token is collected from a specific dungeon, that token is grayed out and is unavailable until the dungeons reset at midnight. By spending 20 gems per refresh (increases up to 80 gems per refresh), a specific dungeon level can restock its token immediately.

Once there's enough tokens collected, an option to upgrade the Hero is available in its profile tab. Clicking on it will raise the upgrade threshold to the next level. It is free to upgrade, and its stats will be improved across the board.

How to get more Hero Tokens

That's not the only way to collect Hero Tokens. You can find them in Event rewards, Hero Calendar, Honor Shop, Aether Shop, Daily Rewards, many Quests, crown quests for Guilds, the The Tower of Pwnage, Portal Summons, and even Free Hero Tokens, see below.

Each Hero Star boosts all stats of the hero. The more stars a hero has the more powerful they become.

Alternatively to Portal Summons the Hero Tokens can be used to unlock Heroes. You need to collect a specific number of tokens. After the hero is unlocked you can team them up, and use them for Dungeon Runs or Dungeon Raids. If the base star rank of a hero starts at a higher star rank, that is, higher than one star (★), then the amount of tokens to unlock it is the sum of the tokens required up to that rank. For example,

The following table gives an overview where to find tokens for your favourite Heroes. Not all Heroes can be upgraded by collecting tokens found in dungeons. But you can collect tokens from Portal Summons, buy tokens in the Shops or collect them during a Special Event. 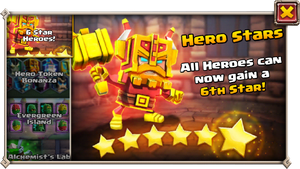