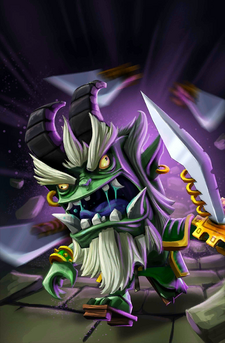 Tsume's early access to its tokens and its powerful passive ability Savage Fury makes him a formidable opponent in PVP and PVE. Its Magical passive prevents him from taking excessive magical damage, while tearing apart almost every enemy that fails to take him out. Pair him up with other Nature heroes or other warrior heroes, both having passives that affect classes, and you'll have yourself a powerhouse.

The beauty of using Tsume is gambling with his lack of health and his ATK buff from his Savage Fury passive. Reducing his health from one attack will most likely bring his health down to 75%, which will boost his attack by 1.5x. His subsequent specials and basic attacks are that much more effective in clearing out waves of enemies. His Soul Shred deals little damage when his health is full, so when used as a friend's champion it will not deal a lot of damage. His ability is better utilized in removing enemy team-wide buffs like Yokozuna's increased defense buff, Squinch's Pyromaniac buff, or even a single Taunt.

As his health decreases, the damage output is increased up to 3.5x times, making Soul Shred an effective area of damage attack.

His double chop attack deals a significant amount of damage to one target, especially when his health begins to drop. With multiple strikes, he has a high chance at landing a critical hit.

Finally, his Spreading Panic attack makes him a formidable opponent. Each of its strikes (up to three hits) has a chance to inflict Fear on that target, which will subsequently double the damage inflicted by any remaining Spreading Panic strikes. This is one of the few attacks that have the capability of inflicting Fear. This can help take out minibosses and other difficult enemies with a lot of life.

Bovus' Warrior Heart passive increases the life of all Warriors, which will increase the amount of life that Tsume can fight in low health/high ATK buff situations. The two passives stack on each other cumulatively, meaning that it will be a total 30% increase in health. Adding Willow Swift's Nature Heart passive and the total health jumps up to 45%. With almost 50% more health, this creates a powerful PVP team.

Chief Nubnub's Stout Team boosts his DEF and ATK by twice as much as non-Nature allies, although Voodoo Chant weakens the damage output of Tsume despite its critical chance increase.

When used in PvP, pair him up with other heroes mentioned above to passive to increase his life total. This will prevent enemy heroes from shooting him down quickly. When used in defense, he will quickly tear down players who unknowingly use aoe attacks against Tsume, because he will survive long enough to use Soul Shred at low life. To deal with an enemy Tsume, either avoid using AOE damage or use two Fast heroes that will take him out.

If Ella Ametryst uses charm on Tsume with very low health his savage fury can oneshot or seriously injure your whole team.

Death
Community content is available under CC-BY-SA unless otherwise noted.