View source
watch 01:36
We're Getting Mutants in the MCU - The Loop
Do you like this video?
Play Sound
Torchy
Fast Beast Rogue
Bronze Hero 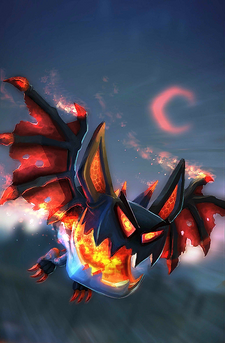 Torchy is relatively good in the Tower of Pwnage, as his

Fiery Fangs have a super fast recharge. Beware of his health in the tower, and the potential of being bursted by characters because of his extreme low health. He will be a very good Hero for you to the climb the tower.

In Dungeon Raids the Silcence debuff of

Lock Jaw is the ideal counter for

Bovus El Doro and other defenders that would disable the attacking team. This is useful as Bovus is a common sight in My Dungeon. (See How to use this Hero below for details)

Willow Swift defends a dungeon she often goes for Torchy with

Sniper Shot in Dungeon Raids. This is especially useful for the attacker as it won't CRIT and deal less damage because of Elemental disavantage, often taking Torchy to half of his health only.

Bovus El Doro) right off the bat, unless the enemy is weaker (less ascended, less stars). Use another fast hero or an AoE attack to finish them off. Or team up Torchy with

Mangle Jaw to empower this attack with passive synergies.

Note: Since Burning Targets have their defense lowered, make sure to use Torchy's

Bat Out of Hell first. Most people expect to kill Tsume or Bovus immediately with Bat out of Hell, but usually it doesn't work as planned, and this can lead to a loss.

Easter Egg: Tapped him too hard

Boss Island - Lava Academy: Trying to get Torchy's Epic while he felt asleep

How to use this Hero

Torchy's main use is in PvP, as his tremendously low health makes him weak in campaigne if he is not protected by a tauning Tank. Due to the fact that all of his abilities take very little time to recharge, he can a special attack every 2 to 3 turns (that is, if he can manage to survive). His

Bat Out of Hell ability can bring mostly any

Lock Jaw, is favored in PvP. It can Silence mostly any heroes, allowing you to have more time to take him out before he uses his/her special attack. He is a key to killing heroes like

Synergy with other Heroes

Bat Out of Hell ability combined with something like Willow's

Bat Out of Hell with something like Chief NubNub's

Goblin Dance Party and it'll to some pretty big damage.

Yasmin Bloom can also help since torchy can often get 1-shotted by an attack from a water hero. But that's not what Torchy is famous for...

Despite his size Torchy is the greatest

Pack Scout in the game. If you put him on a beast team Torchy and the other Beasts will buff each other passively. Beast tanks like

Pignius Maximus can protect Torchy in Dungeons runs. Solaris can heal and revive Torchy in tight spots and passively buff his health, especially when on a full Beast team. On long trips through Dungeons it is recommended to team up with

Solaris (or replace one beast with a non-beast Healer), use Vampiric Runes, or pack more Heal Potions for the trip.

Lock Jaw is the primary reason most Seekers (that's you) bring him in. Often when fighting someone like

Pontifex Mortis of someone else with strong AOE abilities, Torchy is the key to winning.

Lock Jaw can give you up to 1 turns to take out a hero before it uses it's threatening special attack. Pairing him with

Bat Out of Hell will K.O. most Nature Heroes or Water Heroes. His tremendously high hero power can also give your opponents second thoughts about raiding your dungeon. Overall, at low levels, he is one the best heroes at PvP.