The Tower of Pwnage 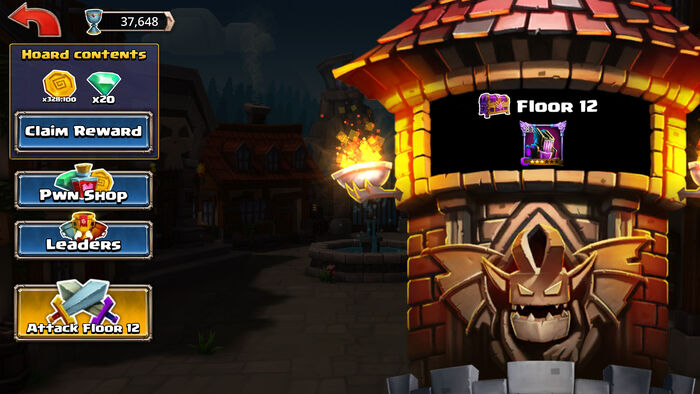 Take your entire force of heroes and defeat every floor, collecting loot along the way! Spend your gains in the shop exclusive to The Tower of Pwnage!

The Tower of Pwnage (unlocked at Player Level 16) is a series of dungeons that is fixated on the management of your entire team roster. It challenges your ability to use your special attacks sparingly, while being able to form dynamic teams on the fly. It requires you to choose Heroes that work with the correct passive abilities, and maybe even get you to play with Heroes that you didn't know were fun before! The rewards you gain at the end of the 12th level (all twelve chests and the ancient chest) will be worth the effort.

Challenging this arduous tower requires a little bit of strategy in juggling health bars and cooldown timers. Here are the following rules: 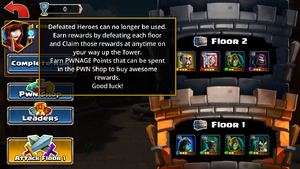 The battle on the first floor will usually consist of random heroes at levels lower than your player level. They may not be fully ascended either. The total team composition is determined by the team power level that would align with your current player level. As you advance to the next level, enemies eventually become fully ascended, or they gain a significant stat boost due to star level gains.

After the completion of each floor, you immediately gain access to the chest drop of that particular floor. Those chests may consist of stamina, honor scrolls, or other resources used within the game. Some floors give you access to gold chests, and you can preview which floors have them by scrolling up through the levels above you.

Once you reach the last floor level, you will encounter Lord Chromus, a Dark-element boss that resurrects a total of four times after each death and adopts a different element and different skills.

At any point of the dungeon fight, you can retire from the fight and click complete run. This will prematurely collect your rewards up to that floor level, cashing out and locking the dungeon for the next twelve hours. You will not be able to fight the rest of the battles from that level onwards.

Lord Zomm is usually a must-have for the Tower, due to his ability to revive heroes that have died as undead. If you finish a level of the tower with a hero as an undead Zomminion, the hero will start the next floor with the Zomminion's percentage of health and the original hero's starting energy. This is very helpful when completing the tower successfully.

Another strategy that is sometimes used is "baiting", in which the player sends in a team of weak heroes to absorb the abilities of the defending team, therefore resetting the cool-down, before sending in the real team to defeat the heroes on that floor. This allows the main team to avoid a lot of damage, and is useful when fighting barb teams, especially with Drakk the Warlord.

The PWN Shop is accessible via The Tower of Pwnage. Here you can spend your

The last change to the shop offer was made with the New Portal Update (Feb-2019). 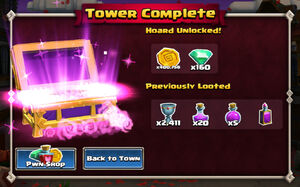 During your journey, you can preview your chest drop rewards by holding down on the chest icon next to the floor level. Gold and silver chests randomly spawn throughout the Tower, and you can preview what you'll get in advance by scrolling up through the next levels. The last level holding Lord Chromus has access to an ancient chest. In addition to chest drops, there are also Daily Quests that are associated with the Tower. Completing a specific level of the dungeon will earn you some rewards as well.

If you retreat from a floor, your Heroes will keep their current health while the enemies' health and cooldown timers will be reset. This applies to enemies that have been defeated as well.

However, if your entire team died in the attempt to complete a level, the health cooldown timers of those enemies will remain the same for your next mounted attack. Their health starts off from wherever it last fought, and skills and cooldowns that they have gained are carried over.

Any spells that heal over time (such as

Chief NubNub's Voodoo Chant) will not heal one last time when claiming the treasure chest, thus wasting the buff and a chance to heal that turn.

Archangel Emily's Resurrection will only work if she is in the same fight when a hero died. She will not be able to resurrect heroes that were defeated from a previous fight.

When dealing with Fast hero attacks, use low level heroes or heroes that you can discard to take their hits. For example, an enemy's

Black Diamond's first attack is Blade Storm, an attack that deals damage to the entire team. Intentionally bringing one hero to take that hit will force that special attack to be on cooldown the next time you engage the fight. Be aware that the her next ascended skill is Assassinate, which deals a considerable amount of damage at any level.

Pontifex Mortis as a way to take extra hits if you need to soak up more than one attack, since they take at least two hits to knock out.

Any heroes that were feared out of battle will be alive in your roster of heroes, with their total health equal to the amount they fled the battle with.

Lord Zomm's Taste for Brains will not remove Lord Chromos from battle.

If you start a tower but are unable to finish it before daily reset, you can finish the tower and start another one on the same day. Only a maximum of two towers are able to be "stacked" like this.

When there is an enemy

Lord Zomm, if you kill one of their teammates, and it is turned into a Zomminion, and then lose the fight, when going back onto the floor, there will appear to be 3 heroes until it is

Lord Zomm's turn where the lost hero is subsequently revived.

Pontifex Mortis dies, and returns as a skeleton, and then the floor is won; when

Pontifex Mortis is played again on a different floor, he will be a skeleton, but once the floor is won with him alive, he will be reborn as a human.

Completing a lower level of the tower.

Completing the top level of the tower.

Rewards for beating the tower

With the New Portal Update (Feb-2019) the loot for beating floors of The Tower of Pwnage has been reduced. Evos,

Stamina have been removed from the floor chests. Furthermore, the shop offers in the PWN Shop changed. All offers of Hero tokens have been removed since the update. Loot Keys offers have been added back a few months later in 2019. The supply of Celestial Evos and lower Evos has increased.

Historical Content!
The following images are outdated but kept for documentation reasons.

(Old) Full summary of the tower of pwnage loot

Old daily quests for The Tower of Pwnage

(Old) Reward of the completed tower

(Old) Loot from 12th floor chest for beating the floor