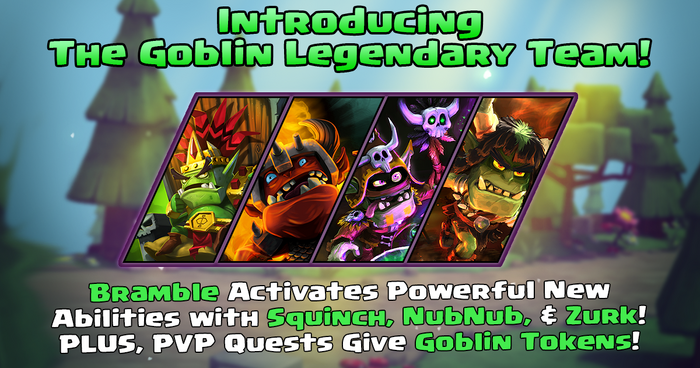 This team consists of the following members:

To have Cruel King Bramble on this team is critical because he will enable several passive traits of his Goblin kin.

The passives of the individual team members count as strong buffs for the entire team.

Good to be King by

Heal to the King by

Most players start of by using

Cruel King Brambleto improve the attack (ATK) and the chance to land a critical hit (CRIT) of their Goblins, and try to manage a high CRIT chance for as long as possible. After that it's just unleashing multiple attacks (Some have seen Bramble hitting up to 8 times in a row due

Cruel King Bramble to keep up morale and make a party! Cheers!

Zurk to take out casters, and CRIT, CRIT, CRIT for hasted extra attacks.

Squinch to Burn everybody and use

Playing with Fire for that extra 1.5x damage boost.

Chief NubNub to Heal, Heal, Heal. A critical hit is a team heal!

This team will flourish when they critical hit, so based on that you will need to boost the critical chance or skill stat of every member.

The full Goblin team as decribed above is often used for Dungeons runs in Auto mode, but not for defense of the Seeker's Dungeon because the strength of this team is also its weakness.

If an attacker uses

Squinch it will wreck havoc among your goblin family. This damage by the attacker is greatly improved by setting the Goblin on fire (for example by a Meteor Storm from

Feared debuff before the use of charm.

An option is to replace one or two goblins.