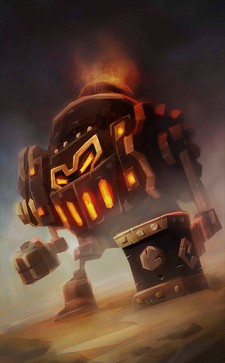 The Furnace is often used in Dungeon Defense. It's first action is to

Stoke the Boiler. This adds the buff "Fired Up: All damage done also does additional Fire damage" to all team mates and additionally a Taunt buff on the Furnace. As a result an attacker needs to remove both buffs from the Furnace to get rid of the Taunt effect. Abilities like

From the Shadows only remove the first applied buff (Fired Up). But a

Theft of Grace performed by

Malice will do the trick.

Snakes on the Plains can purge multiple buffs of a single target, too.

The Furnace is the 53th Hero and the first Construct in Dungeon Boss released in March 2016.

Being a construct, The Furnace can only be repaired, several ways to do this can be with

Positive Charge, which heals and repairs.

The Furnace is Epic

Too much pressure in the boiler can make the Furnace explode 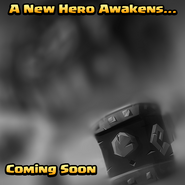 Teaser (before his release)

The furnace is epic 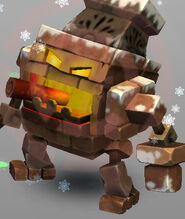