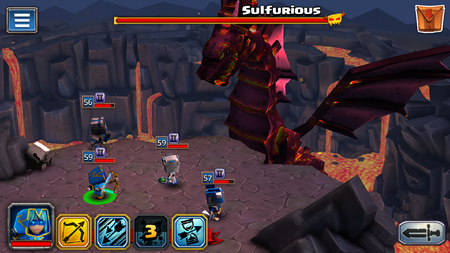 Sulfurious is a huge red Dragon and the boss of Chapter 16, in the mission Devourer of Flames.

He has all the usual boss immunities (i.e. forget about burning him, freezing him, charming him, poisoning him, or diseasing him), plus his only attributes are fast and attacker. Since there are no "fast hunter" or "PWN attacker" abilities in the game, this limits your options. The good news is: He's a fire enemy and he has a weakness to cold. Some good heroes to use against him are:

IGOROK - Polar Pounding is a great help, Polar Master, however, will not do any extra damage.

Selwyn the Enduring - All he does is cold, even if he can't freeze Sulfurios. He can, however, chill him, so delaying his attacks while you use your own is a viable plan. Selwyn is the textbook definition of "fragile", however, so getting him to Sulfurious, let alone keeping him alive during the boss fight, is a challenge.

Samurai Takumi - Frost Katana (another chill attack) is LETHAL. Bitter Strike is also strong, even if freezing is off the table.

King Yorick - Another support option. He has no cold attacks, but Sulfurious is not immune to Marked for Death.

Yasmin Bloom - A Water Healer who buffs Water Allies' health with her passive trait. This makes her a very good support to add to a team against Sulfurious.

Stone Fist - His Fist of Justice ability will weaken Sulfurious significantly, allowing him to take more damage. In addition, he is also Burn immune, making him a very effective taunter versus the fiery dragon.

Icebloom - Her powerful water attacks deal large amounts of damage. Let it Snow can be used as a back up heal. And a fully ascended Icebloom can give him the slow trait on any attack.

Indigo - Like Icebloom, does high damage and can also slow Sulfurious if fully ascended.

Sulfurious is not immune to shock. You can use

Electrical Storm will inflict a lot of damage and each hit will deal a huge additional damage to Sulfurious. A taunting, fire-proof Tank like Stone Fist is recommended.