For many heroes, there are festive skins and costumes available. These skins are introduced through Special Events and are rewarded for completing

Event Quests, while others are usually featured in the Shop for a limited time during

Portal Events. Skins can also be found in the

Aether Shop as well. Some skins are exclusively available through in-app purchases only. 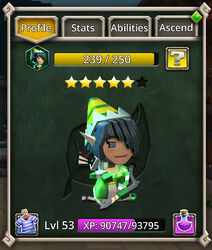 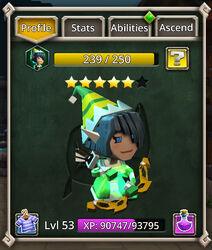 A skin changes the appearance of a hero completely. Sometimes it grants a stat boost for a limited time (e.g. Health & ATK boosts for a day, double Candy reward during Halloween Event). While skins may provide temporary stat boosts for heroes during certain events, the original traits and abilities remain unmodified. But a few so called Ultimate Skins add a trait to the hero and change their combat skills slightly (See below for details).

Portal Events that offer skins require sometimes that you have the specific hero unlocked to get a lucky pull from the Portal Summon, while in big Special Events you can often earn the skin even if you don't already have that hero in your collection yet.

All skins change slightly in appearance according to the current Ascension state of a hero. The portrait and Hero tokens also reflect the skin including the Ascension state. Epic heroes have a special border with a silver skull on the top of their portrait.

There are a total of available at the moment.

Nitpick and some other heroes have 2 Skins available, one Festive Skin (e.g. Halloween themed), and an alternative skin for a different appearance.

Once you have received a skin for a hero, you can select that skin in the character sheet. You can do this by tapping the

striped pullover icon, which will open the skin selection menu where you can choose the new appearance of your hero.

During an event that features a skin, you can tap the

striped pullover icon to preview the skin in grayscale. The icon vanishes when the event is over if you have not already obtained the skin.

Most event quest lines in the past have offered 5x

free Heroic Summons if you already owned the rewarded skin while collecting the final reward.

During the Halloween Event 2018 the first Ultimate Skin was released, Slasher Drakk. These skins are not only purely cosmetic but also add a trait to the hero. See Ultimate Skin Effects to get an overview of the traits and their effects.

Fire Heroes with skins and costumes.
Click on the Skin's name to scroll down for details.

Water Heroes with skins and costumes.
Click on the Skin's name to scroll down for details.

Nature Heroes with skins and costumes.
Click on the Skin's name to scroll down for details.

Dark Heroes with skins and costumes.
Click on the Skin's name to scroll down for details.

Light Heroes with skins and costumes.
Click on the Skin's name to scroll down for details.

Retrieved from "https://dungeonboss.fandom.com/wiki/Skins?oldid=25094"
Community content is available under CC-BY-SA unless otherwise noted.