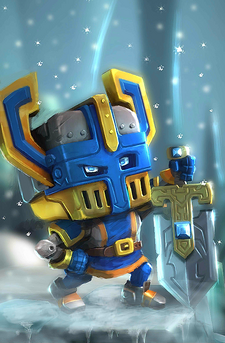 Sir William has yet to discover their Epic.

To increase Sir William's abilities, a mixture of ascending and gaining him Tokens will help him significantly. Ascending him will make him better at protecting the team, with new powers and passives to do so, and increasing his Star Level will give him a health and DEF buff, increasing his skills as a taunter. The other main option for a Tank is Stone Fist. There are several differences between the two. The first is Sir William is armored, Stone Fist is magical. The second is Stone Fist is based around debuffing the enemy team, while Sir William is more for buffing his own team. Finally Sir William can punch harder and isn't slow, but Stone Fist has a higher defense and health, and immunities due to

William's role in a team is to Taunt for his allies, as well as give DEF buffs, particularly for a water team. His armored trait helps him significantly at this, making all physical attacks deal significantly less damage. The downside of his armor is that it makes William vulnerable to shock and Armor Hunters like Therand Fiddlestrom. William himself also has the

Protector of the Realm trait, giving him a boost to Undead ,Demon, Monster and Beast Heroes. Both make him effective at dealing damage against the respective targets. Fire Beast, such as Mangle Jaw and Torchy, are easy prey for Sir William. But watch out! Unlike Stone Fist William is not fire-proof. Another trait that is worthy of mention is the passive

Water Guard, giving all water allies a DEF buff. This works well for an all water team.

Bring It On, is a special version of Taunt. It causes William to retaliate any attack. However

Emperor Zulkodd are among some heroes who are immune to this, due to

Flying in the Face and

Reckoning of the Wicked respectively.

Sir William is a good taunter, and works well with any team that needs a taunter, regardless of the team members themselves.

If going for an all Water Team, combining Sir William with Yasmin Bloom can lead to a large buff for all water allies, thanks to William's

Water Heart, giving both a DEF buff and Health buff to all water allies. If combined with IGOROK's

Shattering Team and another damage dealing water hero, this can lead to a very strong team.

When Sir William is used in PvP, it is best to take advantage of his

Water Guard passive to increase the DEF of all water allies, regardless of whether he is attacking or defending. Sir William is an effective defender, as he is the only character who uses Taunt as his first action. This results in an instant taunter for your team, and he is the only character to do this. Sir William also works on increasing the DEF for a standard team, with

Bulwark and his taunt. Please note that although William is a robust DEF tank (like all armored high DEF tanks), it lacks the defense against fire and lightning damage, and attacks that ignore armor. Also when Taunt is active William is vulnerable to the trait

Challenge Accepted that Julius and Squinch have.

Bring It On lasts one round longer than all the other taunt abilities, and has mutiple funny animations when the skill is used.

Sir William became fearless and got an improved taunt ability from the New Changes to Six Heroes update.

Tit for Tat trait was upgraded and now grants him an Aegis shield when damaged. 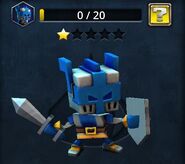 Sir William is the boss of the event dungeon Echoes of the Past
Community content is available under CC-BY-SA unless otherwise noted.
Advertisement