Shocked - Target deals AoE Lightning damage to self and allies when attacked.

The status effect is easily seen by the arc lightning surrounding a target. Shocking targets is one of the most efficient and dangerous status effects in clearing out large groups of enemies. Any target that has a

Shocked status effect is treated as a potential threat to its entire party. 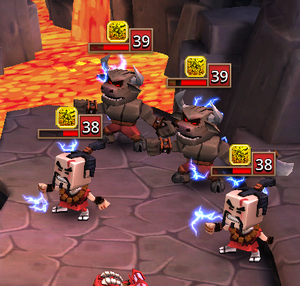 By attacking that individual, an area of effect attack of

Lighting damage is dealt to other members in its party.

The amount of damage dealt by Shocked targets depends on the Skill stat of the hero that inflicted the Shock debuff. Damage mitigation such as

Magical (reducing the amount of magical damage dealt by 25%) can reduce the damage. While Armored targets take a boosted damage of Shock (1.5x). Especially

Ekko can deal massive Shock damage with his Epic and Runes that boosts his Skill stat.

In addition, the Shocked effect triggers for every hit that target receives. This means that for attacks that deal multiple strikes to the same target, each hit will trigger the lightning effect hurting the target. Every round the target can also hurt their allies by shocking lightning strikes. For example, Ekko's Electrical Storm deals multiple strikes per target. If the first strike successfully inflicts the Shocked Status, then further strikes from the storm will trigger a cascading effect of lightning AOE. If the entire party is inflicted with the Shocked status, then any further area of attack will trigger mass-wide feedback of lightning AOE from each source. Damage dealt by Burned, Poisoned, or Shocked effects do not trigger additional Shocks.

Heroes that have the ability to inflict Shock are Light Heroes such as Ekko, Sifu Jianzhi, Alexandros and Dhaegon Stonecrusher. Julius' Barrel Toss attack can inflict Shock as a random debuff, too.

Shock Immune heroes can't be Shocked (debuffed) and take no damage from their Shocked allies.

The following heroes have or can inflict/apply Shocked:

Electrostatic Field (Trait): Chance to Shock a random enemy at the start of this Hero's turn.

Unstable Bomb (Special Attack): Ranged Physical Attack on target enemy that applies up to 3 random status effects. Cooldown of this special attack is reduced for each status effect missed.

Electrified Whirlwind (Special Attack): Melee Lightning attack on all enemies with a chance to Shock, reduces the first enemy's energy by 1.

Static Strike (Basic Attack): A Basic Melee Physical attack with a 100% base chance to Shock the target.

Electrostatic Field (Trait): Chance to Shock a random enemy at the start of this Hero's turn.

Arc Khakkhara (Epic): Chance to deal 3x damage on target and applies Shocked to all enemies.

Ghost Dynamo (Epic): Chance to do a Ranged Lightning attack for 2x damage, Shock, and steal 2 Energy from the target.

The following heroes are immune to Shocked:

Will of the Wisp (Trait): Immune to Spirit, Lightning, and Light attacks. High resistance (75%) to Paralysis. [Light allies start Dungeons with +1 extra energy]. The text in [brackets] is of rank II of this trait (I/II).

Ride the Lightning (Trait): Immune to Lightning, Shock, Silence, and Paralysis. Whenever another ally Shocks or Paralyses an ememy, or hits with lightning attack, this hero will make a follow-up Basic Attack on that enemy.

Living Stone (Trait): Immune to all debuffs but can be healed normally.

Living Stone (Trait): Immune to all debuffs but can be healed normally.