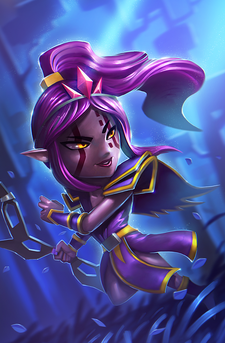 Shadow Queen Daeris has yet to discover their Epic.

Shadow Queen Daeris, the Dark Elf archer, hosted The Grand Guild Games that took place the first weekend in May (29th April to 1st May 2016). Tokens to unlock her were rewarded for completing her guild quests. She is the 56th Hero introduced to the players.

After her first Ascension

Fast, otherwise she is a Normal Attack speed hero.