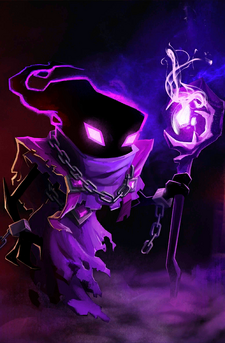 Shade was the first "VIP only hero" who was obtainable by non-VIP players through a quest line during his debut. He is the 68th Hero in the game.

Shade is easily one of the most used heros in PvP both for attack and defense teams. He is usually teamed up with other dark heroes due to the synergy provided by

Dark Shroud. However you may encounter him also in very different team setups, because of his strong tactical capabilites mainly provided by

A very strong and often used tactic with Shade in an attacking team depends on providing him extra energy, so that his

Spirit Link is available from the first turn on. Also a fast hero, Shade can be a key player to counter many defense teams.

For example, if a defending team relies on a taunting hero (e.g.

Goretusk), Shade can steal the buff rightaway, effectively making himself the "Tank" in your team while mitigating all damage received to the enemy tank.

In another scenario, Shade is often used to counter

Solaris based Beast teams. In that case

Spirit Link will help to remove a Phoenix Feather from a beast to remove the corpse rightaway (e.g. if teamed up with

Possession can be used to remove the corpses of fallen enemies, to keep them from beeing resurrected.

There are several ways of how to provide Shade with that mentioned extra energy to make him an even more usefull PvP hero. If you team him up with

Kobal the Pestilent the passive trait

Dark Deception will provide enough energy to have Shade's

Spirit Link ready in the first round.

Kobal the Pestilent is currently not considered to be a very good PvP hero, the most effective way is to provide Shade with a Rune that provides additional Energy. These types of runes are not very common and cannot be crafted. They are usually only available at special events and should be a top priority for ambitious PvP players, as they open up many new tactical possibilities for a lot of PvP setups.

Dark Shroud buffs and removing him from the field possibly in the first round, because in the second round he will probably

Possession someone of your own team and make the fight much more unpredictable..

Purging Pyre while dealing extra damage because of his

Koros indeed is a strong counter against defending Shade players. Also, if attacking with Shade one should take extra care when facing this Monster.

Plummeting Doom even if

Dark Shroud is active. If you are facing an enemy Shade using Agnon will almost guarantee that you can remove Shade in the first round. It is very hard to try to prevent

Agnon's first move because of his strong starting defense buffed by

Jabber Clenchjaw as well can dispose Shade because of his

Flesh Shredder trait, however it is harder to keep him alive until his first move, as compared with

When Shade defends My Dungeon he posseses dead attackers first at all in round 3. If there is no fallen attacker but a dead ally then

Shade will possess that ally. The attacking player can use this A.I. behavior in their favour.

Feared but only has little chance (6%) to resist the debuffs

Starts Powered). With a Festive Rune (+1 energy) or with

Kobal the Pestilent on the team Shade can get energy from

Dark Deception and have his

Spirit Link battle-ready. This counters literally all start-dungeon-with-taunt Tanks or enemies with Tank Runes, as long as the enemy does not have purge effects. Festive Runes intentionally do not work in The Tower of Pwnage. For the same reason Shade's

Spirit Link also has no extra energy there. 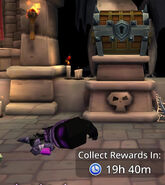