The Portal allows you to summon Heroes and tokens using

Great Summons, depends on what you sacrifice the Portal.

Frequently there are Heroes featured in Portal Events, which give you better chances to get that featured Hero.

Note: There is the specifiy chance to unlock a certain Hero. If you have already summoned that Hero you will get Hero Tokens as a replacement. The amount of tokens depends on the rarity of the Hero.

Great Portal Summons begins with a 5% chance to drop Bronze Hero tokens. See "Hero Drops" list in game for exact odds of each Hero. When a hero has enough tokens to become

6-starred, the chance for that Hero to be dropped in the Great Portal Summon is removed, and that chance is shifted to a chance to find a Gold Chest.

There are 16 Bronze Heroes:

Beside Hero tokens you have the chance to find a chest in a Great Portal Summon. There are three kinds of chests, with different chances to find.

Wooden Chest (60% chance), the wooden chest is very common and can contain:

Silver Chest (35% chance), this chest is uncommon and can contain:

Gold Chest (0-5% chance), rare, it has a 0-5% chance, depending on how many Bronze Heroes you have six-starred. See "Hero Drops" list in game for odds. The chest can contain the following loot:

Heal Potion, plus 50 chance for another
1x

Energy Potion, plus 50% chance for another
1x

Some of the rarest Heroes. Hero or Token Guaranteed!

Heroic Portal Summons can unlock (almost) every Heroes or reward

Hero Tokens if have you already unlocked that hero. The odds/chance and the number of tokens depend on the Hero Rarity.

The given chance (%) does not refer to certain hero but to all heroes of that Hero Rarity. Featured Heroes have a much higher chance to drop.

Heroes not obtainable by Portal Summon

The following Heroes are not obtainable by a Portal Summon. They are either rewards, or are available only during events or at specific places.

With the New Portal Update (Feb-2019), the VIP Portal and the

Honor Portal had been removed. A few months later, the VIP 5 Portal Boost event was introduced. On Wednesday, all players with a VIP Level of 5 or higher can choose one of four pre-selected heroes. The choosen hero has a 15% drop chance. All summons function normally as usual but with an increased chance for the selected hero.

Because the Portal can't handle two different drop rates for VIP and non-VIP players at the same time there is unfortunately no featured hero on Wednesday. 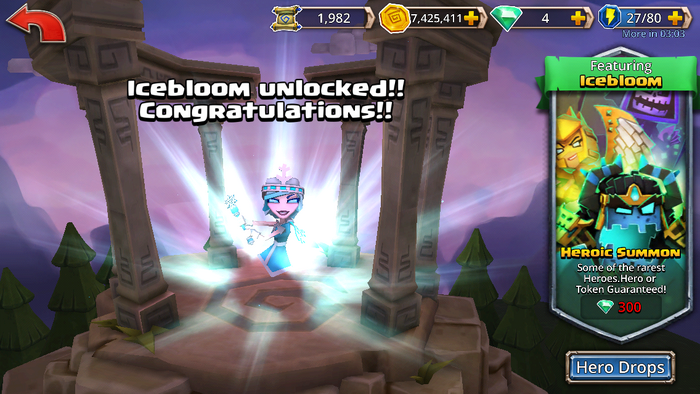 Hero unlocks give players a chance to acquire the hero without having to fulfill the token requirement. Heroes that are unlocked through summons are instantly at the unascended rank, at

star 1 ranking and level 1 (unless modified by VIP benefits). Any tokens that were collected prior to the unlock will transfer over and add towards the upgrade of its next star ranking. For this game mechanic, any hero in your roster that haven't been unlocked already will have a chance to unlock in the portal summon.

Value for Gems and Gold, and Summons for Free

Willow your second Hero for free

Abigail was already summoned so 15x tokens as replacement

Squinch was already summoned so 10x tokens as replacement

Guaranteed unlock while Bauble was featured