View source
watch 01:36
We're Getting Mutants in the MCU - The Loop
Do you like this video?
Play Sound
Phemus
Monster Ogre Warrior
Silver Hero 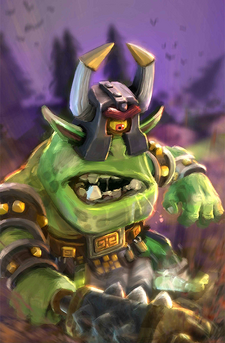 Phemus has yet to discover their Epic.

To improve Phemus, increasing his Stars will help him significantly as a character. After all his DEF, ATK and Health are what makes him effective as a character. Ascending once is also a must if he is planned to be used as a taunter. Second ascension is also very powerful, as

Wild Rampage is a helpful and powerful tool. Luckily, as a 1 star character, he is quite easy to ascend.

Phemus' role in a team is to serve as an acceptable taunter and a strong damage dealer.

Slow is a helpful trait, as it gives him some of the highest ATK and Health values in the game. It will, however, make him attack last. The main thing this will mean in campaign is you must be careful if you plan to have Phemus taunting, as you will probably have to take a wave of attacks beforehand. He also has the

Magical trait. This makes him very effective at taunting against many magic wielding enemies. In addition, he also has a unique trait,

Turn a Blind Eye. This is by far one of his best features, as he is completely immune to Taunt, except for the DEF/Health buff that comes from the power. This can be, in the right situations, devastating.

Earthquake, a powerful attack which allows him to deal a lot of damage to one target and do small amounts of after shock damage. The initial hit of Earthquake is devastating, and can actually one shot a fully ascended

IGOROK if a CRIT is achieved. The aftershock, while doing little damage to every character, is not to be considered useless either. Small amounts of damage are still damage, and that can be very effective against the right people. For example, it can get rid of

Yasmin Bloom's Aegis powers. Just be careful however. As the attack hits everyone, including your own heroes due to aftershock, it can leave Phemus effected by characters's passive stats, such as

Ekko's Electric Skin, if they are either friend or foe.

While Phemus isn't the best taunter in the game, with a high starred character or a healer he can be very effective. He has a lot of health, and as a result can last a while if being attacked by the enemy. Having a healer backing him up, particularly

Chief NubNub, can have him lasting a very long time, taunting the enemies for your team.

Wild Rampage has a lot of potential to do a great amount of damage to enemy heroes. Unlike

Wild Rampage is a physical attack, making it much more effective on characters such as

Wild Rampage a Physical and more deadly version of

Earthquake. However, you cannot pick the target enemy of

Wild Rampage, so it is best to use it when all enemies have high health, that way, you avoid killing enemies who are already near death.

Using heroes who buff other Nature Heroes will benefit Phemus a lot. The health buff from

Willow Swift will make him a more effective tank, and the ATK buff from

Tsume will make him a stronger damage dealer. Taking all three will lead to Phemus being a very powerful character.

In addition, CRIT chances are immensely powerful when combined with Phemus.

Julius can give him a temporary but high CRIT buff, while ascended

Rocky the Shiitake can give a buff with no requirements for power.

If Phemus is taunting, he is reliant on a Healer.

Yasmin Bloom work well for this, however a tag team between two weaker Healers works well too, such as

Phemus has a unique place in PvP.

Agnon is a common sight in PvP, and, being a Nature Tank, Phemus is easily beaten by her. Due to this, Phemus is generally not the greatest of all defenders. That said, a Phemus with a high start rating or fully ascended can seem like a lesser threat than characters like

Bovus El Doro, so Phemus can use this to sneak in his high damaging powers. Attacking with Phemus has a lot of potential. If combined with a CRIT buff character, Phemus can one shot most enemies with

Earthquake, including the feared

IGOROK. He also works well on teams that have taunters, as he can be used to damage the weaker enemies that were relying on the now ineffective taunter to protect them. 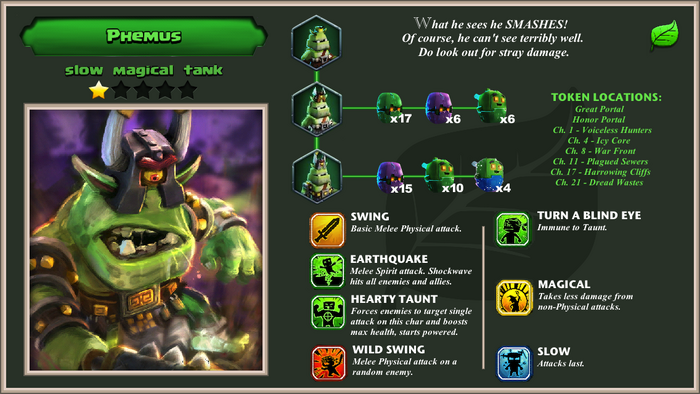