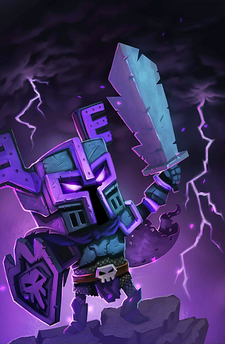 Overlord Executum has yet to discover their Epic.

To improve Overlord Executum, ascending him should be a priority. While Executum is good at lower levels, an unascended Executum will quickly lose his effectiveness throughout the Campaign. Ascending him will make him much more useful. Increasing his Stars, while difficult, will benefit him too. The Tower of Pwnage is probably the most reliable way to do this.

Executum's role in a team changes throughout how he levels up. Initially, he will be more helpful as a Warrior, however at later levels his skill as a Tank is more useful. Regardless of level however he is still very effective at both. His

Lifeless becomes very handy in the right situations, such as against Kang-Kung's Frostfume Breath.

Light Hunter also greatly helps the Overlord as a warrior, allowing him to easily destroy Light enemies with both Light Hunter and his Dark elemental buff.

Void Blade is a helpful addition to nearly any team. It does decent damage, and this improves significantly against enemies who are either Light or have Spirit Weakness. It also adds Debilitate, which significantly reduces an enemy bosses' effectiveness, reducing their ATK, SKL, CRIT and DEF to protect and give allies more opportunity to damage. Best used on bosses or powerful light enemies, and also characters who can pack a real punch in PvP, such as

The Overlord's high DEF and

Armored passive makes him an excellent taunter, and as such his second ascension ability

Taunt is very helpful. The DEF buff easily gives him the toughness to defend his team. Just be wary of hard hitting non physical attacks, like

Leech makes him one of the most self sufficient taunters in the game, rivaled only by

Armored is a powerful attack which allows Executum to heal a percentage, and eventually more of the damage he inflicts. This power is best used on a weak or armor reliant Light enemy, such as

Black Diamond, to allow him to heal the most possible. A

Void Blade reducing the enemies DEF, followed by a

Leech can also give Executum a good health buff.

Executum is a good Taunter, and does this well regardless of the team.

Yasmin Bloom is a good healer for Taunters.

Undead Fervor gives him an ATK and DEF buff, making him not only significantly tougher, but also hit harder, allowing him to do more damage and heal a lot more with

Undead Heart (outdated) gives Executum a large health buff, making him an even better Tank. Combining the two legendary heroes will make Executum an undead force of mass destruction, and one of the most self sufficient characters in the game.

Executum's use in PvP is simple, but effective. If needed, he is an effective taunter, as unlike most other taunters he can deal a lot of damage once he has begun taunting and using his powers. Defending him up with

Chief NubNub will lead to a fairly hearty tank. Combining him with an Undead team will always be powerful as well, especially if using

Lord Zomm. On attacking, Void Blade can be used to weaken enemies with powerful AOE, such as

Julius. It can also be used to one shot most light enemies, just watch out for

Spirit Immune. If instant killing one enemy isn't enough, he can then begin taunting and taking the pressure off your team.

The Aether Shop update (May 17th 2016) moved Overlord Executum from Heroic Portal Summons to Honor Portal Summons. Since this update his tokens can be found in

Honor Portal Summons, and purchased at the PWN Shop.