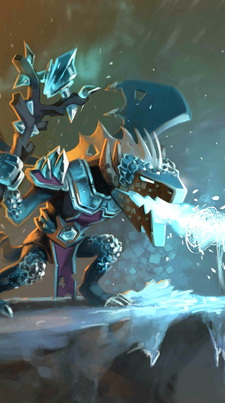 Niveous has yet to discover their Epic.

Niveous joined on February 14, 2019 during the Frostfire Valentine's Event (2020). The Caster Ice Dragon that can summoned Ice Golems and cast a Snow Day is the 100th Hero in the game.

Niveous can resurrect allies - but only Dragons. Allies of other Families are replaced by his own creations: Ice Golems. These golems look like

ICE AGE IGOROK, and are a Construct Monster Tank at the same level and

Niveous was the coldest, cruelest, and weakest of the ancient Dragons. He kept to himself, focusing on his craft of cryomancy. His powers allowed him to survive the great freeze, and revive his fallen Dragon brethren, bringing younger dragons backas tests. He decided with his newfound abilities to leave his old tormentors on ice and until the right moment...

When summoned his Ice Golems run amok. They can use Chaos Rampage and Shatterstorm to cause even more Chaos!

Niveous caused Chaosfire to enemies
Add a photo to this gallery
Retrieved from "https://dungeonboss.fandom.com/wiki/Niveous?oldid=28367"
Community content is available under CC-BY-SA unless otherwise noted.