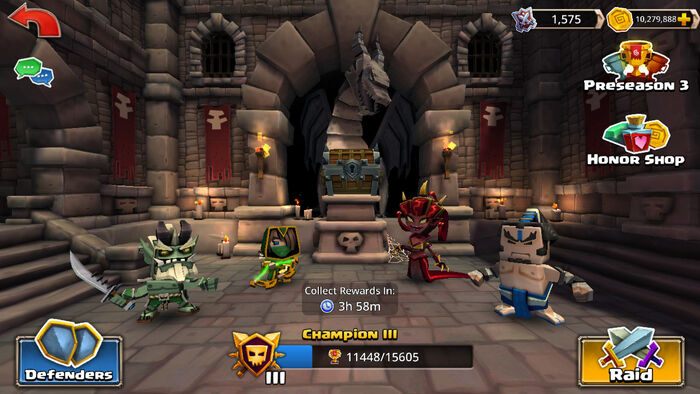 This option is unlocked at Player Level 10. My Dungeon is also the place where Dungeon Raids can be started.

Once a day, a chest within your dungeon will produce an amount of

gold based off of your ranking. However, when players begin to raid your dungeon, and succeed in doing so, you may lose some gold and honor.

Your chest is protected by Heroes you choose as defenders. In the case that your chest is raided successfully, the amount of

gold taken are nearly equivalent to how much you would often take from others when you raid them.

Although you can defend your chest with your defenders, you may also use hammers to protect your chest, preventing the loss of honor scrolls and gold. However, you will still lose trophies.

The strength of your defending team calculates the gold multiplier. It increases the rate of gold production and the maximum gold that your chest can store.

See Dungeon Raid for details on battle play and selection. 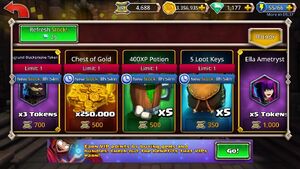 The Honor Shop is another Shop found in My Dungeon (unlocked at Player Level 10).

An adventurer can use Honor Scrolls to purchase goodies through the honor shop. The shop contains the following items:

How Targeting Works (The AI Explained)

While on a Raid the attacking heroes are controlled by the player, the defending heroes are just selected by another player but controled by AI (Artificial Intelligence)

The targeting AI on defense uses the following logic for a single-target attack:

The AI will choose a predictable target some of the time. Knowing which defender is most likely to be targeted can be helpful versus strong single attackers such as Shade. For example, lead-off Shade often picks Emily as a primary target in PVP, even when she is equipped with enough DR to take minimal damage from his attack. This is because Emily is a light hero, often does not have the most health on the team, and because the "% damage reduction in PVP" value from her runes' 4th stats is not included in the calculation.

1. When the defense attacks with an Area of Effect ability (AoE, one which hits all enemies), the hits proceed in this order:

Kobal the Pestilent in the far left slot will make him the first target, to immediately disease the defense upon his death due

2. When the offense attacks with an AoE, the first target hit is the one chosen by the player (attacker). Subsequent hits proceed in an order which is randomly determined at the beginning of a battle, but remains consistent for that battle.

There is no good way to predict who to aim for so that Kobal or Zen are hit last with an AoE, unless you pay close attention to the order of another AoE first.