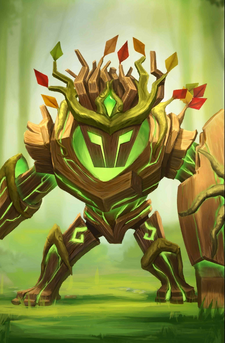 Moriko has yet to discover their Epic.

Moriko was the last of the 4 Spirits that celebrated their debut between the Halloween and Frightmare Before Winterfest events in 2020. He was revealed on 2020-12-08 and is the 109th Hero in the game.

Taunt and no ability with a

His crowd control abilities consist of preventing any

The trait responsible for this,

Lord Zomm's Zominions, however, are little impressed by this and continue to rise from the ground unhindered.

Moriko was released he had the simple version of the

Slow trait without revenge attacks and stat boosts, and he was no member of the Plant family. This is fixed.

Runes that are restricted to the Plant Family can be equipped now.

Moriko has a close bond with

Vulcan. All together, they can perform a special Spirit Team