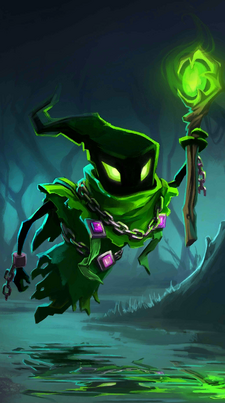 Impervious buff to Mire every time he heals.

It’s dark. Thunderstorms can be heard in the distance as A shadowy figure  approaches the temple of Doom.  Levitating against hells mighty gravity that would crush any who dared to step in that evil lurking forsaken plAce, the figure is illuminated by those hellish purple torches, that every so often float on the walls. Fast and silently, moving like a fleeting shadow, it goes door after door, deeper into the maze of those catacombs, it arrives to the room of power. Being locked by ancient magic, the doors stand tall and mighty as bones are piled up,  after  those fast or lucky enough to get this far, only to get blocked by thy passage.

Whispers echo as the figure uses its dark spells of unknown origin to break the magic keeping the doors in place,  for any other creature this would be impossible; but this was no  ordinary creature.

Noisy metallic noises accompanied by a marching sound can be heard at the distanced - Guards and hellish creatures rush to the sealed doors, noisy metallic noises from those who  once used them mighty armors and fallen to temple, now trapped forever as servants to it, rush to purify thy intruder.

A Huge blast destroys the sealed ancient doors, sent to ground nearly making a new dungeon on the floor when they fell down. The room tho giant is nearly empty having one single red glowing crystal in the middle that had a faint glow coming from the ceiling. From within the dust and smoke two glowing purplish dots can be seen within the mist, entering the fainted room whose only light came from the mysterious centered object. As the entity  approaches the crystal an angry deep fiery voice echooes trough the dungeon

“YOU CANNOT HOLD IT!!! THE POWER IS RESERVED FOR THE FIRE KIN ONLY, STEP BACK OF FACE YOUR DESTRUCTION !”

The intruder didn’t even flinched as he finally touched the crystal and removed it from its throne Sealing it in his bag of eternium he sceams “FOOL YOU HAD THE POWER TO BECOME THE BIGGEST ANTEDILUVIAN FORCE OF DESTRUCTION YET YOU GREW FEAR WITHIN YOU, NOW I WILL SHOW YOU THE POWER OF- “

A vortex pops up besides the intruder, as the faint red glow of the room turns into fiery red blazing light, following footsteps noise, Emperor ZulkOdd appears behind the paralized spirit figure

“YOU REALLY THOUGH YOU COULD TAKE IT FOR YOURSELF SHADE??” - Emperor laughs with fiery fierce

“IT IS HERE FOR A REASON, AND YOU WERE MY RIGHT ARM FOR ONE TOO. I GUESS I NEVER WAS ABLE TO CONTROL THE MIGHTY SHADOWY KING AND IT SEEMS YOU HAVE NO PURPOSE HERE, I HEREBY BANISH YOU FROM THIS REALM, AND I TAKE ALL YOUR ESSENCE TO MYSELF!”

ZULKODD casts the forbidden spell, as hands come from the ground grabbing Shade in place and dragging down

“ NOOO!!! I WONT!! YOU WONT GET AWAY WITH THIS!!” Shade tried to use his powers to spirit link zulkodd but it was too late, the crystal hAd drawn all his power and left him depleted, vulnerable. As the hands get to hard to fight, Shade takes one last look to thy Magesty that quickly grabbed his staff as he was dragged down to the void.

In another land, far far from that wretched dammed place, it was just a normal day for Jumbeaux, as he was strolling down his swamp trying to enjoy the evenings sun remains, when a huge thunder blast rushed from the skies to a nearby place. Curious about the nature of the thunder, Shrek as he was Also known, Jumbeaux, decided to investigate.

As he approached the location he was met by a dying Shade, barely moving and badly burned by and never seen before fire that water could not put down.

Jumbeaux took  him to the swamp , bathing him in special mud to help the burns to dissolve. Time went by and one day Shade woke up barely seeing what was going on he sees a big figure that tells him “EAT “ so he complies, despite never having to eat before, shade in a flinch created a mouth in his spectral body to be able to eat.

From that day on Jumbeaux would treat Shade with a mix of his own power and the mud he would gather from the Mystical Swamp plains where he lived, that also geanted him power all those centuries ago.

One day Jumbeaux went to check on him and found a empty bed. After being somewhat worried where would is guest be he found him outside looking at the sky, enjoying the sunset colors. Approaching him he explains ever and tells his guest about how they met.

“Worry not about the what was of the past, worry yes about the now and where you want your future!!”

Those words shine inside Shade as he was filled with this new sensation overwhelming him. It was so strong light started emanating from within him and there was a quick blast of light.

After this blast Jumbeaux noticed something different

“Woah your eyes man... they changed”

“Yes” retorted him in a new toned deep smoothing voice, much alike Jumbeaux

“I have the same power, you feel it right? That is the power of life and all that surrounds us. It will never quit you, as it is binding to you. “

“Yes... i can feel it” - looking at the last rays of sun that were fleeting the sky . “I will protect this land and this source “

“It is very brave of you, and i do Admire you, but Nature needs to protectors, it always finds a way itself... “ being interrupted by his guest

“interesting... i do understand what you say. Mire”

“ My name is MIRE, and I SHALL PROTECT  THIS LAND “

And that my friends, is the story of Mire