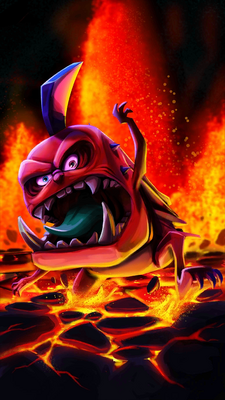 Mangle Jaw has yet to discover their Epic.

He is now a Monster and no longer a Beast. His stats have increased and he had some changes to his abilities.

His Lock Jaw will prove useful in PVP Raids as it can Silence enemies on hit, preventing them from using their annoying Special Attacks which can do all sorts of disturbances to your Heroes. An example is To War! Artillery as it has a really high chance to Freeze.

If using Mangle Jaw as a PVP Defender, put him first, as if attackers don't have any Fast Heroes in their team, Mangle Jaw will attack with Hot Coals first. Moreover, Hot Coals has a relatively high chance to Slow, which means that more of your Defenders will attack and deal damage. The result? A few dead attackers.

If you decide to use Mangle Jaw in tough Campaign Dungeons, pair him with someone who can keep him alive as he has extremely low HP and DEF. Executum is a good choice as he can Debilitate (decreased ATK, DEF, SKL and CRIT) attackers when hit with his Void Taunt and Void Strike, as well as buff team DEF with his Void Strike, significantly reducing taken damage. This will definitely keep the very damaging Mangle Jaw alive for as long as possible.