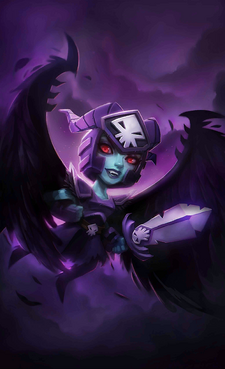 Non-demon enemies suffer from the

Sacrifice debuff in the first round that is caused by Malice'

Malice snuck Into VIP Portal before her official debut. She was introducted to the players on 8th, Feb 2016 during the Special Event The Dark Angel is Here! and featured in the Portal Takeover! event.

Malice is the first Hero released after the 50th Boss Party. She replaced Indigo in the VIP Portal and was a VIP only Hero for several weeks. Kai Makani replaced her currently and and she swooped down into the

Heroic Portal where you can get tokens for her. More tokens are available during Events, from the VIP Portal on special days, and from the Aether Shop.

During the special Event "Light Vs Dark" on 18th, May 2018 Malice got a revamp replacing several of her abilites and traits.

Malice with her Epic "Terminus"