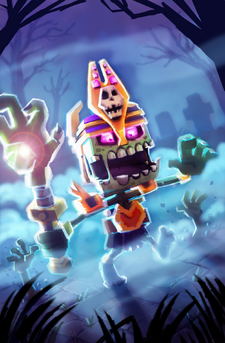 Lord of the Undead

See Haunted Halls for a breakdown of the Halloween event as well as its limited appearance in other crypt dungeons within the campaign.

Taste for Brains will still trigger a health restore and a corpse removal even if the killing blow was not dealt by the skill. Using

Taste for Brains on an Evo will not trigger a heal because it did not leave a corpse behind.

Lord Zomm is often great for The Tower of Pwnage as he can basically revive heroes with his ability to create Zomminions.

Solaris from resurrecting. It's save to free a

Spirit Linked ally with it because

Taste for Brains purges all buffs on enemy first, then deals damage.

See Undead family for more information on this class and synergies.

Frozen or disabled by a

Paralysis debuff. All Zomminions have one Special attack depending on their class. The class and

Runes are the same as those of the fallen ally. If an ally runs away

Dead allies that are protected against corpse removal (

Solaris will stay on the floor and not zomminionfied. 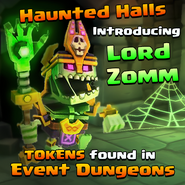