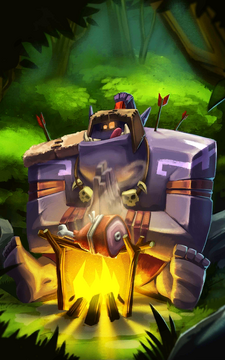 Kozar Bonebreaker has yet to discover their Epic.

Snow Day buff. It adds a DEF boost for the team when Kozar uses his

July 8, 2016, Ogres have risen up from deep underground and have joined forces with the Goblin Clan unifying into one army called the "War Band".

Kozar Bonebreaker, a new hero with monstrous strength, had his debut as new VIP Hero. He is the first Ogre and the 63th Hero available in the game.

Provoked and debuffs to protect allies. He provides a passive health buff for Goblins and Ogres, and can purge (dispel) enemy's buffs.

Dwarven EMT to boost Kozar's attack (as a result of the

The Bigger They Are trait).

Kozar Bonebreaker was the smartest Ogre. He grew up using his head to solve all his problems, whether they be a jar, dwarf, or toothache. He met the Goblins and found happiness for a time, until the dwarves started to encroach their territory and slowly started pushing the Goblins out. Like all of his problems, he used his head to solve it, eating or headbutting each Dwarf in the way.

However, that was not enough and the Dwarves eventually drove his Goblin friends away from their home. Alone, and upset, Kozar set out with a newfound purpose: to destroy the Dwarves and find the displaced Goblin to unite them again. His head alone was not enough for this task, so he picked up a club and ventured forth!

These changes were made to balance the overpowering Zen and Kozar Bonebreaker tactics in Dungeon Raids. 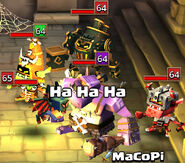 Kozar jumps in front of Squinch to protect his Goblin ally.