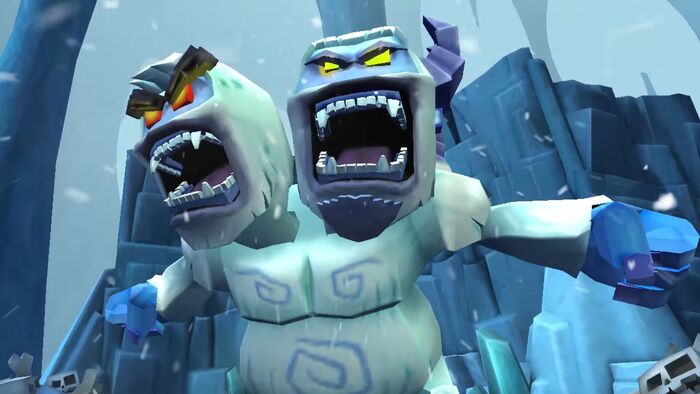 So, how many times were you defeated?

So, how many times were you defeated?

Willow Swift - Willow's high damage attacks in addition to her fast trait makes her a valuable opponent against Kang-Kung.

Bovus El Doro - Being the strong and tough hero he is, he will be a valuable asset to not only fight the monster but get to him too. Stampede can be used to destroy all the Tantrum items too.

Tsume - The nature demon with his powerful area of effect attack will waste no time making Tantrum ineffective.

Yasmin Bloom - A healer is a must to ensure the survival of your team to the great beast, and Yasmin is good for the job, particularly if budded up with Water allies.

Chief NubNub - And of course, NubNub is another powerful option for a healer.

Stone Fist - Thanks to Impervious, Stone Fist is a powerful ally to have against Kang-Kung, as he ignores the most dangerous effects of Frostfume breath, as well as serves as a good team taunter.

Phemus - Another option for a taunter, and can deal more damage, at the cost of defense.

Nitpick - While he is vulnerable to Kang-Kung's attacks, his Meteor Storm can deal great damage thanks to Kang's Fire Vulnerability.

Shadowblade - When at his first ascension, his ability to disease on crit is very useful versus Kang-Kung, especially in Challenge Mode, where Shadowblade is able to lower Kang's attack so low health and defense heroes can survive.