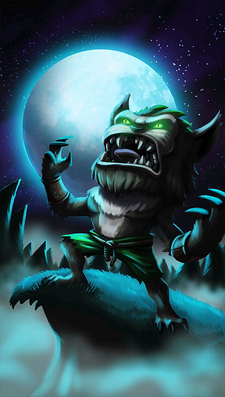 Jabber has a lot of potential despite being a one-star hero. It's recommended to immediately upgrade Jabber's stars by collecting tokens and upgrading him to a 2 star hero. This isn't difficult to do, because you gain Jabber tokens at some early dungeons (1 and 4).

His high Critical Hit chance makes him a high-damage output hero. With his

Beast Mode, he attacks one target for 4 times, also buffing all beasts on the team until the end of turn so make some good use of it, enabling him to inflict critical damage 33% of the time (personal experience) from at least one of the hits to an enemy. To increase this already-high critical chance, simply ascend him to gain another level of 25px ??pack furry iii?? which increases all beasts on the team's Crit chance. If he manages to critical damage an enemy, due to his

Venom Master ability he will poison the enemy, too.

This isn't all.. Along with his high Crit chance Jabber will almost definitely destroy your unarmored enemies due to

Flesh Shredder This is especially useful against dungeons with alot of beasts or stuff like that, opponents like

Grog-Gnog are also affected by this.

After fully ascending Jabber he will gain a new ability:

Poison Rampage. This skill not only has a pretty high damage but can inflict Poison to your enemies, poisoned enemies receive damage every turn. He will also get

Although Jabber might not be the best hero on his own he is still useful in a team, he benefits from many other Heroes buffs.

Hog Wild You can also combine him with heroes like

Solaris to boost his health (

Jabber's Poison and Fear can prepare an enemy boss for Squinch's

When playing him you will probably want to use him in an OTK (One-Turn Kill on a hero) with Lupina, applying fear. Then, Beast mode whoever seems most threatening or who goes next, then, using Solaris, special-attack the enemies away

Jabber is easy to upgrade and ascend. His Epic does 1.5X damage to all enemies 3 times and applies fear to them. I would sudgest Health runes to help make more use of the Solaris Lifesteal, and the 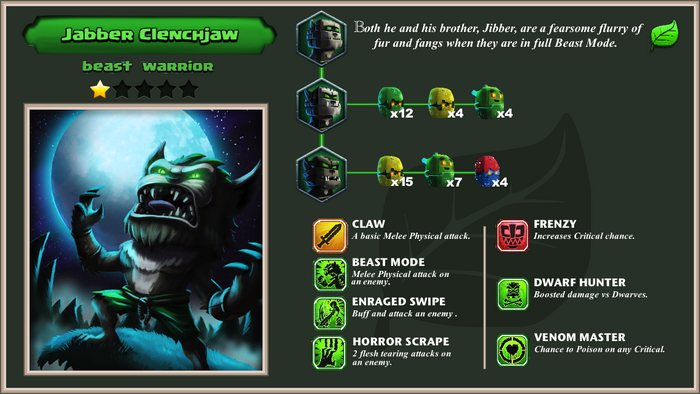