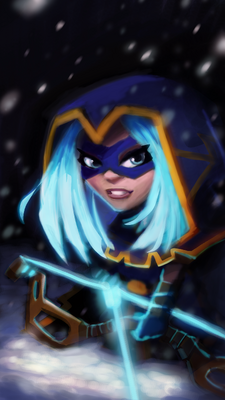 Indigo has yet to discover their Epic.

Ascending should be a priority for Indigo. She will be more useful with more abilities, and ascending her will make her more effective overall. Increasing her Star Levels will help too, increasing her health and her damage improves her significantly as a character.

Indigo's job in a team is to both do significant damage to the enemy and to debuff them as well. Her

Fast trait allows her to get in some shots before the enemies have a chance to do so, or debuff them before powerful hits arrive. Her basic attack is effective at this, as she not only has a fairly high attack, but also has a chance to Daze the enemy, thanks to

A Real Stunner. Her

Rapid Fire ability does a decent amount of damage, however, it's effectiveness comes once she has been ascended once, as her

Critical Energy allows her to give energy to her team on a CRIT, which is very useful if you’re firing 3-5 times.

Chilling Barrage ability gives her a chance to affect not one, but the entire enemy team. While the ability's damage is limited, it has a strong chance to Chill the entire enemy team, making their abilities fail to recharge. Particularly in PvP, this can be a huge edge, as enemies forced to use normal attacks are a lot less dangerous.

Slow trait, minus the health and ATK buff. It also deals a lot of damage. Often the ability is more useful to just deal damage to a certain enemy, however in PvP it can be used to slow down enemies before they can bring in dangerous attacks, such as

Tsume. It can also be used against fast bosses to let your other heroes attack them for more damage. This is particularly helpful against Kang-Kung. Its also worth noting that in PvP, using this against a slow enemy will allow your slow your allies to strike before them. This can be a life saver sometimes, mainly against

Critical Energy, which allows her to give the team bonus energy on a CRIT.

Energize gives the team not only +2 energy but also a CRIT boost. An energize followed up by a Rapid Fire or Chilling Barrage can give the team huge energy boosts, which is very useful for characters such as

Archangel Emily who have powers which have a long recharge time.

Indigo does not have a lot of health or defense, and goes down pretty quick. To counter this,

Water Heart can be used to give Indigo and all Water Heroes a health buff, or

Water Guard used for a defense buff. Both combined give Indigo her highest survival chance.

Indigo also has a much higher survival rate if she has a taunter on her team.

Stone Fist are some of the best options here. With a taunter, there is less need to worry about Indigo being easily destroyed by her foes.

Bovus El Doro. Either she can do some damage to the most dangerous of the enemies, or she can give a little bonus with

Critical Energy also allows her to increase these character's energy, as their powers tend to have longer recharge times.

Indigo doesn't naturally fit into PvP as well as some other characters, but she can still be a worth addition to any team. From a defense perspective, it is most likely best to put Indigo first, to make sure she will get her

Rapid Fire is pretty powerful, and if targeted on any non Armored or non Nature characters, will often defeat them. This is very effective against Fire Heroes, particularly

Torchy. In attacking others, Indigo plays a similar role. Hopefully picking off the most dangerous Fire Hero on the enemy team. In PvP, it should generally be expected that she won't survive the first turn. However, she is powerful enough to make her first turn do significant damage. The acceptation is if

Yasmin Bloom are on the team. Combining those two give Indigo a much higher survival rate, and allow her to debuff and damage the enemy at will.

Sloth Shot on hard hitters can be very devastating, and

Chilling Barrage is a wonder, reducing the enemy's energy significantly.

Indigo was the second VIP Portal only hero after Julius escaped the VIP Portal.

Since May 2017 it's revealed that Willow Swift and Indigo are Half-Elven.