View source
watch 01:36
We're Getting Mutants in the MCU - The Loop
Do you like this video?
Play Sound
Ignus the Mad
Barbarian Caster
Silver Hero 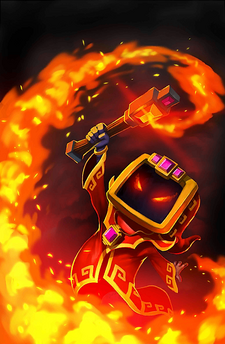 Ignus the Mad has yet to discover their Epic.

How to Use this Hero (OUTDATED)

Ignus the Mad can be a very effective and a real damage dealer. To do this, ascending him so he gains more powers is very effective, as

Wall of Fire tends not to hold up as well on it's own at later levels. Increasing his star will also improve him too.

In a team, Ignus' duty is to deal a lot of damage over time. His

Pyromaniac passive power lets him gain a big boost for damage to enemies that are burning. As a result, burning enemies with

Wall of Fire or another hero's power followed by Ignus' other abilities or even basic attacks will result in a huge damage buff, thanks to

Pyromaniac and the DEF lowered by Burning. He is also

Fire Immune, meaning he takes no damage against all Fire Attacks. This gives him good defense against characters like

Nitpick. At first ascension, he also gains Fire Cruisade allowing him to buff the CRIT and SKL of all Fire team members, making him an effective Fire leader character.

Wall of Fire is the bases of using Ignus. The initial casting does fairly little damage, however the burning effect does great damage and lowers the enemies DEF for not just Ignus, but the whole team to start dealing serious damage. Just be careful to pick your fights.

Wall of Fire ONLY works on Melee characters, and an unascended Ignus is easily countered by a ranged team. However, burning your enemies with

Wall of Fire can leave lasting damage even is Ignus is slain, and opens up more damage potential for the whole team.

Energy Drain (outdated) at first ascension, and the power helps him significantly. The power drains 2 energy from the target and gives it to Ignus, as well as doing high damage. As all of Ignus' powers have a long recharge, Energy Drain can help deal with that. Draining the enemies power is effective too, and if combined with an ally capable of Chilling, it can force a boss or a dangerous PvP opponent, like

Yokozuna, to use nothing but basic attacks. Its damage is also very powerful, especially if a combination of all three of his powers is made.

Volcanic Shards is a powerful ability for Ignus. It not only deals significant damage, but also gives an ATK buff, giving him more power for the next 2 rounds.

Volcanic Shards' short recharge (compared to the rest of his powers) also makes it useful. Ignus can also use a triple power combo, to deal a massive attack to a target. First cast

Wall of Fire, and hopefully over the next 2 rounds your target will burn. Then use

Volcanic Shards for an ATK buff. Finally, use

Pyromaniac, DEF down from Burning and ATK buff from

Ignus is quite a weak character, and is quite reliant on the team to support that. As there are currently no characters with a trait like Fire Heart or Fire Guard, the only way to defend him well is with a taunter. Any will work, however

The Furnace' passive buffs will make them a very effective taunter for Ignus.

Ignus' File:??fire crusade?? ??fire crusade?? also gives him potential as a Fire leader. He is quite effective in all Fire teams as a result of this. Teaming him up with

Wall of Fire Burning but his whole team as they gain

Abigail the Brutal will give Ignus the chance to benefit from an ATK buff. As stated before,

Pignius Maximus' Bondfire buff will benefit Ignus greatly, and they make a solid team too.

Spirit of Fire will also result in a stronger Fire Team.

Ignus makes a very powerful defender, as his

Wall of Fire is effective at damaging many enemies. He will only improve as he ascends, and

Energy Drain (outdated) will deal effective damage on his enemies at higher levels. Just try to put him with a Taunter. On the attack front, as Nature teams are a common sight in PvP, Ignus has some potential too.

Wall of Fire will be helpful in weaking enemy team DEF, and this can be effective if combined with AOE, such as

Whirlwind. The damage dealt will also be effective, and Ignus only needs one turn to make a lasting impact against the enemy team in both attack and defense.

For a long time

Ignus the Mad tokens were a common reward found in

Heroic Portal Summons. This has been changed with the release of the "Introducing the Aether Shop" update. Collect tokens from dungeons and events to raise Ignus' star rating.

Ignus got a skin and is now called Ignus the Wicked