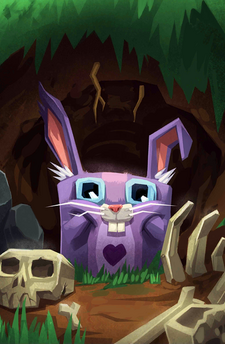 Due to Hopper's ability to remove corpses (

Hoppy Ending, after first ascension), it is quite handy in PvP to use her to prevent

Leonidus from taking action and reviving their allies.

Lord Zomm's Zomminions army. Even if she removes all of

Lord Zomm's fallen allies he just will replace them. But she can cause a mess. Any of the removed Zomminions will be replaced by another Zomminion. But this time the spawned Zomminion is of a random Class (Healer, Tank, Rogue, or Warrior). Also, the new Zomminion gets a copy of Lord Zomm's Runes for the battle. This can change the battle in favor of the attacker or the defender.

Removed bodies heal Hopper. Her Bites increases Hopper's Max Health (up to 2x) and she gains Energy due her

Hopper cannot remove bodies that are protected by Solaris' Phoenix Feather, or when Hopper is

Frozen or suspended by