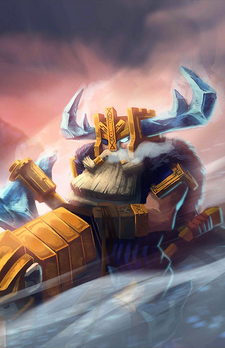 High King Valkin is popular in PvP, used with 2 dwarves, interchangable between

Dagrund Blacksmoke. Then, the remaining hero is

Archangel Emily, as her ability to revive is very good within this meta. In high level range (around level 65 to 80) these dwarfs and Emily often have Unbreakable Heart, Healer and Tank Runes on them, making them a strong defense for My Dungeon.

Valkin is immune to several debuffs due his

Lead By Example lets all allies follow his attack on his target.

Dwarven Resolve, deal extra damage to opponents who have a high dodge ability (

Evading) like Rogues, Yokozuna, and Lily Blossom's when she used her

High King Valkin appeared the first very time on September 15, 2016 for 4 days in Heroic Portal Summons. He is the 65th Hero in Dungeon Boss.

Dwarven High King on top of his excellent attack and defence stats when fully ascended. His Epic

Hugin and Munin replaces this trait by

Epic Dwarven High King which passively buffs his attack and defense by 50%.

Since this recent Dwarf update Valkin was not only

Fear Immune but immune to all debuffs due his

The update on December 18, 2018 replaced Invulnerable with

Impervious. That is, Valkin cannot be

Diseased. But he can be

Spirit Link Valkin but he can not use

Possession on dead Valkin. He is immune to it.