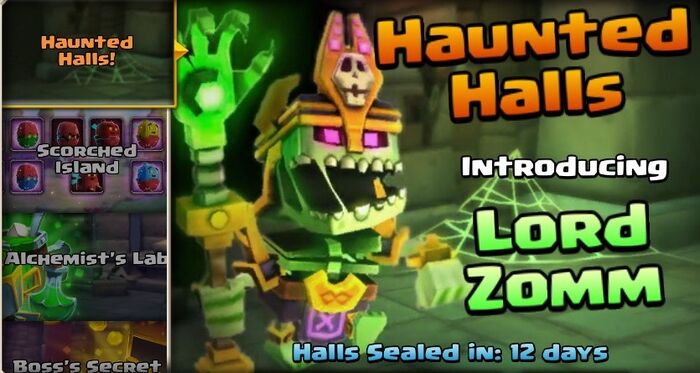 You'll notice the new spooky changes! Your town hub now has a couple of jack-o-lanterns, the trees reaching out above those houses, that larger moon in the distance, and it's always night-time! This event utilizes a new currency called Candy Corn, just like Frightmare Before Winterfest. Go straight to the event tab, where you will find that

Lord Zomm is the next attainable character in this event dungeon. Get him while he's running about, because he costs 100 tokens to unlock! There's also a couple of quests that will reward handsomely, so close your eyes and tread quietly through those dungeons ... if you dare!

There are ways to get ready for this event. WIth such a short amount of time available for this event, you'd want to be ready for the impossible. Make sure that your bag has revive potions and health potions. Make sure that the heroes you're using are equal to your player level. Each level is scaled to match your player level, so each player has an opportunity to beat every single level! Bring a healer like

Yasmin Bloom to these dungeons; they will keep your other heroes happy and alive. 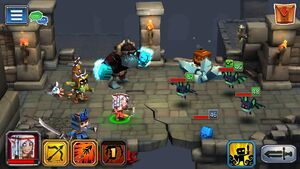 Be on the lookout for those new pumpkins in the levels! Clicking on them will give you gold and energy, which is definitely needed because these these dungeon levels specifically requires 10 energy to enter, twice as much as normal levels!

Each dungeon has a different theme that progressively becomes more difficult as you unlock them. The following information will help you guys figure out how to defeat those pesky monsters.

This level is full of bats. Have heroes like

Willow Swift that shoot from a distance so that you can take advantage of the Ranged Weaknesses of those bats.  At the end of the level, you'll fight a bat that resurrects into a hero that looks like

Lady Nimriel to knock him out with her

This level is full of water-based enemies, so it's better to avoid using fire-based heroes. Like always, bring a healer along to keep your heroes alive. Just like

Ekko, some of the enemies here are immune to Spirit-based attacks.

This level consists of Nature-based monsters. Quickly dispose of them with any of your fire-based heroes. You'll get poisoned often so bring a healer to keep that health up. At the end of the level, you'll fight a monster that multiplies every time you damage it. Keep hitting the main boss, since his tinier spawns deal very little damage. He can make up to 4 copies of himself. Ignore the other spawns until you take down the main guy.

This level contains a lot of fire-based monsters. Most of them will burn your heroes, so bring a healer to keep their health up. Avoid bringing Nature-based heroes, but do bring

Chief NubNub if you don't have anyone else as a healer. Because most of the monsters are fire-based, bring water-based heroes. At the end of the level, you will fight someone who looks like

Phemus the Monster. Kill off the doctor first, since he will simply revive the Monster. Save abilities that remove buffs so that you can remove the

Taunt s from the Monster. If the Monster revives, he will receive an attack boost that will guarantee at least two of your heroes will die before the buff expires. In this level, be prepared to bring a couple of revive potions.

This level is full of Dark based heroes and it is extremely difficult. Equip all your slots with revive potions. Take your best heroes and venture slowly, making sure that your healers can keep your heroes at maximum life before fighting the last dungeon. Avoid expending all your strong attacks towards the end of the dungeon. Every monster here will attempt to inflict the Disease status on your heroes. Quickly dispose of any cubes with your ranged heroes. Your team will need some way to keep your enemies dazed or frozen so that you can bring them into the last fight.

At the end of the dungeon, you will fight Lord Zomm and his companion

Pontifex Mortis. Both of them have the ability to revive each other, so it is best to reduce both of their health equally until you can kill them off in one area attack. Just like Dr. Dwarfenstein from the previous level, the revive will add an attack boost, which will ultimately allow Pontifex to wipe out your entire party with his area attack. Bring all revive potions if you need it as Lord Zomm's

From the Grave attack will deal massive damage to a single target.

King Yorick is a great addition to the team since he can increase the damage dealt onto one target by a significant amount.

Masuta Kira is another character that can be used due to his Pwn Undead passive ability. In addition,

Zurk can deal extra damage to Pontifex Mortis due to his 2x damage passive to casters like Pontifex.

The quests below are repeatable, such that each time you've defeated someone in a dungeon, you will receive a reward. Thus, even though their are no more drops for Lord Zomm in earlier levels, an adventurer can quickly advance the token collection of Lord Zomm by repeating the last dungeon. Each objective completed resets the kill count back to zero for the next repeatable quest.

In addition, sometimes extremely rare chests in the shape of pumpkins will show up. They contain 3x Hero tokens.

In addition to the event dungeon, there are ten other dungeons where Lord Zomm can randomly spawn from. He is found in levels where the name plate has a picture of him, as well as as a boss icon for his information. He will be equal to your player level, so be prepared to fight him if your objective is to look for him.

Retrieved from "https://dungeonboss.fandom.com/wiki/Haunted_Halls?oldid=27695"
Community content is available under CC-BY-SA unless otherwise noted.