Haste - Target gains a second action and boosted Dodge Chance until the end of their next turn. 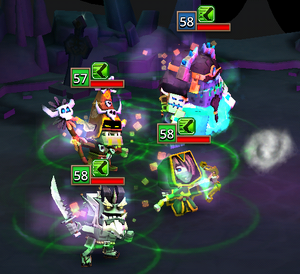 By strategically casting Haste on an ally, they gain an additional chance to unleash all of their devastating attacks on the opposing team. The Haste buff is triggered immediately to grant them their second action. In addition, their Dodge chance is increased (dependent on the level of the skill) to help them avoid attacks until they execute their second actions. The haste buff expires after they take their second chance.

If a room is cleared before their turn begins, then the Haste buff persists in the next room.

Rocky the Shiitake and

To War! (Infantry) can give haste to the entire party, while other heroes like

Chief NubNub can haste a single ally, and heroes like

Lady Nimriel gain haste for themselves.

The following heroes have or can inflict/apply Haste:

Angelic Resurrection (Special Attack): Bring an ally back from the dead with a % of their HP, [Haste] and 3 [Energy].

Haste Ally (Special Attack): Grants an ally a second action on its next turn, plus an evasion buff that grants a [50.5% + 0.5%/lvl] chance to Dodge an attack until the end of its next turn.

Adept Strikes (Trait): Allies and self gain Haste after using a single target Melee Physical attack once per round.

Warrior's Chi (Special Attack): Heals self, then grants self and allied Assassins and Warriors DEF+ buff, +1 Energy and Haste.

Hugin and Munin (Epic): Chance to do an attack for 2x damage, and add Haste to self and all other Dwarf allies + Epic Passive: Epic Lead By Example.