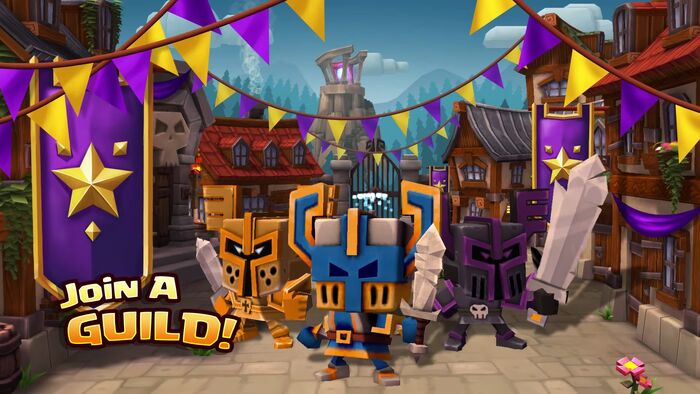 Guilds are groups of players who play together to earn additional rewards and fight for supremacy. The guild menu can be accessed through the guild icon in the town (main screen). All members of a guild have their own chat channel and cen send each other in-game mails to exchange informations.

500 Gems or join other players' guild. Every guild can have up to 50 members, has a motto, and can be either public or private. To join a private guild or before level 7 an invitation is necessary.

The profile of a guild is public and can be viewed by every player, either found in the Leaderboard or in the search result. The profile window shows the motto of the guild, guild ranks in collected

Crowns and the roster. The message of the day (MOTD) is not public and can only seen by guild members. It is also displayed in the guild's chat channel and can be used for news or to inform and encourage all members of the guild.

To get the daily

crown quests the tutorial must be completed, that is, you must beat Kang-Kung and complete Chapter 5 of the campaign. Around Player Level 18-21, all 11 daily quests for crowns are unlocked to earn

40 crowns a day. Before that, some quests are missing as they are too difficult to complete in this level range.

You can leave a guild anytime. But when you leave all collected crowns for the

Crown Tournament will be invalidated. Leaving the guild prematurely is a bad idea as the player's crowns are now missing. As a result, the guild may no longer be able to reach the crown threshold and all players will receive a lower reward. Before you can join another guild, you have to leave the current guild explicitly and confirm it.

Different rules apply for events. For some events, the event currency remains in the guild when changing guilds. While for other events, you are bound to the guild you were in when the event started. In this case, a move to another guild during the event has no effect on the reward. When in doubt, ask your Guild Master.

Every guild is founded and owned by the Guild Master. He can recruit and fire Officers, kick Members from the Guild including Officers, make the Guild private or public anytime, define the motto, and change the Message of the Day.

Officers have more rights than Members. They can invite and kick Members from the Guild but no other Officers, cancel pending invitations and change the Message of the Day. Officers cannot change the state (private/public) and the motto of the guild.

Every player who is not in a guild can join a public guild or can get invited to a private guild and so become a member of that guild. Once in a Guild the member can become an Officer. The member can leave or get kicked from of the guild anytime.

In a public Guild every Member can invite other players to join the guild and can cancel invitations. A maximum of 20 invitations can be pending.

There are serveral types of Guild Games in Dungeon Boss:

War of the Crowns Tournament

Each guild and their guild members participate in the weekly guild tournament. The tournament starts and ends each Monday, 8AM Central Standard Time (US) and lasts for 7 days. The goal is to collect as many

Guild Members can earn crowns for their guild by completing daily quests when they beat Kang-Kung and completed the tutorial. Around level 18-21(?) all crown quests are available. VIP Levels can offer additional daily quests for extra crowns. These guild quests appear in the list of the Daily Quests, marked by a

crown. Complete these quests to earn 40 crowns each day for your guild and to reach a better position in the Leaderboards.

Each guild member can collect 40 crowns a day. This is 7 x 40 = 280 crowns per week per member. A guild with 50 members can reach over 12,000 crowns a week to earn maximum rewards if all members collect their crowns. Excess crowns have no effect on the reward.

Crown Tournament are invalidated. This can spoil the reward of the other guild members because the total amount of collected crowns is lowered.

All guild members can earn rewards for the collected crowns. There are individual long-term quests for collecting crowns and a weekly Tournament reward.

The rewards table can be found in the Leaderboards when you've joined a guild. Open the Guild menu, tap there on "Leaderboards" button, choose "view" botton in the "Guild Crowns Earned" section on the Guild tab. The Leaderboard opens. It has a "Rewards" button on the top left. Tap it to view the current Guild Tournament rewards.