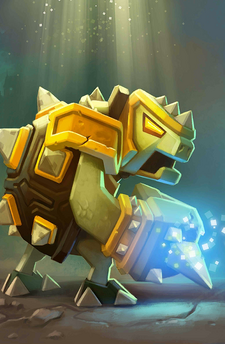 Grondar is best on defence In PVP and is best on a reptile team (Zola, Viperia and Cobressa) as he can buff many of them, for example, Zola's Reptilian Alliance makes her fast when on a team with Grondar, and if Grondar is killed on team with Zola, Viperia and Cobressa would become invincible for two turns if Grondar was killed, and as Grondar is good at taunting this has a high chance to happen.

Grondar also has amazing synergy with all his allies because of many of his traits. For example, 25px ??one for all iii?? One For All III will heal all allies a little bit when he is killed, but if hit with chaos missile, all allies heal about a thousand health, assuming that chaos missile does 12000 damage. Also, his

Shell Power basically grants impervious to all his allies. Most of all, stops revenge attacks with

Reptilian Retaliation for all his allies. Also, his Epic passive Epic Divine Intervention helps glass cannon build heroes like Archon, Alrakis, Serenity, and others. They cannot be targeted, and it's like Aversion for the first round.