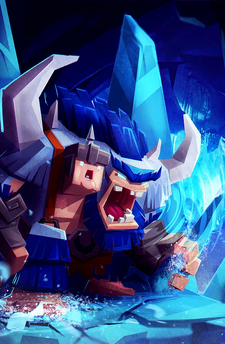 Large And In Charge

During the Winterfest 2016 Event players could earn over 100 tokens to unlock him and raise his star level. Now his tokens are available in

Portal summons and in the (revamped) Honor Shop.

Epic: Gift of the Avalanche

The Half-Orgre-Half-Beast isn't terribly fancy or strategic, he just enjoys Snow Days and smashing things. So it shouldn't come as a surprise that his Epic is very straight forward, it lets him smash even MORE things!

Gift of the Avalanche increases Grog-Gnog's skill, defense, and max health, and also gives him a chance to do 3 additional attacks on random enemies, and that's in addition to his normal 2 hits for a total of 5! BAM! BAM! BAM! BAM! BAM!

Note: The Epic effect does not stack with

Hog Wild. That is, there is no chance for 10 attacks.

This two-headed hero is the progeny of Legendary Boss Kang-Kung and the Ogre Queen that loved him. Grog-Gnog grew up in the mountainous wilderness among wild beasts and harsh conditions. Though he prefers the simple life of a frosty cave, the passing of his beloved mother has prompted him to seek the land of his father and other civilized beasts and ogres. Grog-Gnog’s initial acclimation has not started off on the right foot. His arrival coincides with the holiday season, and the garish pageantry he finds layered atop his cherished winter nature has wakened the beast in him! Unable to be soothed, Grog-Gnog has vowed war against the holidays. Every last bauble and bow must come down, if he is to get his way, so that the greatest of all seasons be may be enjoyed in its natural splendor.