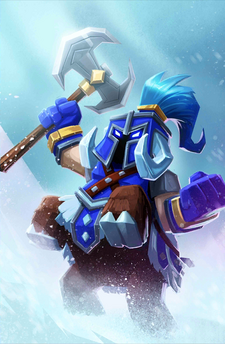 Goretusk has yet to discover their Epic.

Goretusk was the featured Hero of the Winterfest 2017. You could unlock him by opening doors on the Winterfest Calendar. He was released with the alternative festive skin Plushie Pal Goretusk. Goretusk is the first fast tank in dungeon boss. He uses momentum to crush his enemies.See Momentum for further details.