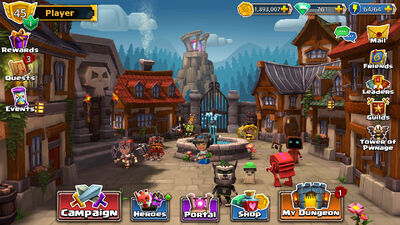 Dungeon Boss is a game revolving around collecting heroes, leveling them, and pitting them against other enemies found in the campaign mode dungeons or PVP (Peer vs Peer) raids. This page is broken up into the following categories.

The homepage is the central hub for accessing quests, looking up events, starting campaign mode, and looking up your heroes. The tabs shown in the homepage are described below. 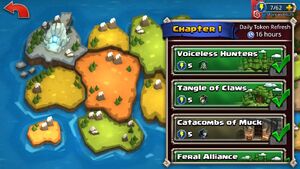 When starting off, you will gain access to campaign mode which opens up a map of "chapters" that you can play through. Each chapter contains a series of dungeons for the player to complete before they can proceed to the next chapter. The player earns gold, experience, hero tokens, evolution materials for ascending heroes, and other rewards upon completion of each dungeon level.

In addition, there are 3 other islands available: Evo Island, Gold Island and XP Island. 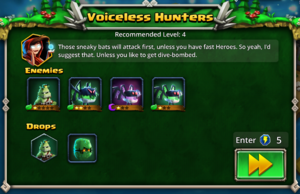 Upon selecting a dungeon level, you will see a panel of enemies and the possible rewards upon completion of the level. The recommended level provides an average group level to help you more easily complete the dungeon. Long pressing on an enemy's icon will display more information about that enemy.

The next screen shows all the available heroes that you have in your arsenal. Each hero has an elemental advantage to enemies shown from the previous screen. In addition, many heroes specialize in specific traits such as deflecting damage, healing damage, or dealing damage. See this for a list of available heroes that you can unlock throughout the game. Your power level is a value that determines how tough you are in battle and is calculated by the level of your heroes and how powerful their attacks are.

It is important to note that your hero line up also determines when they go first in battle! Heroes generally go in the order from leftmost slot to the rightmost slot. This is further broken down into three speed categories: Fast heroes will always attack first, normal speed heroes will attack next, and slow heroes always attack last.

In addition, your bag can carry up to three potions. Clicking on an empty spot will bring up a list of available potions and its respective quantities. Equipping a potion will not use up a potion, but will allow you to access that potion in battle, if needed.

After your Hero team enters the dungeon, they will face a series of rooms containing defending enemies. The number of rooms of each dungeon varies depending on the chapter and level within each chapter, but will always contain at least 3 rooms. Each room can contain a number of enemies that also varies from level to level. The goal is to clear all these rooms and head to the dungeon boss, defeat him and loot his chest.

While in the dungeon, remember your Potions. If a fight gets tough they still can change the tide of battle. Just open the bag in the top right corner to choose one potion. Keep an eye on the environment to find rewarding Sparkly Objects.

Once you begin to add friends within the game, if your Heroes are in trouble, you can summon a Friend's Hero anytime to support you in battle. The first use of a friend's hero is free in each battle. However, subsequent uses will cost you an increased amount of gems. However, utilizing a friends hero earns both you and your friend

"Honor Scrolls", which can be redeemed for prizes later in the game. Therefore, don't be shy about using your friend's hero; they will appreciate you for it!

If you choose to retreat a dungeon all

stamina that you have found are lost. You won't get Player XP and your Heroes don't get any XP neither. To slow down leveling up the Player Level you can do so if you found a Common Chest.

Above each new level there is a banner with hallowed stars. By completing a dungeon with all your heroes alive throughout the entire run, you will gain the maximum of three stars (★★★). The use of

Archangel Emily's revive ability or a

revive potion will still achieve the full amount. Once a dungeon has been completed with 3 stars the "Quick Loot" feature is unlocked for that dungeon. Quick Loot allows you to use a

Loot Key to complete that dungeon in the future, which saves time for the adventurer seeking the rewards at the end of a dungeon.

In a Quick Loot dungeon run you won't encounter any Enemies. Instead you immediately get a Boss chest. The rules are the same as for a normal dungeon run. You must still pay the

energy costs (stamina) and utilize a

Quick Loot key, which can be earned in boss chests, portal chests, for the use of Friends' Hero, VIP bonus or quests. It's important to note that using the quick loot feature does not guarantee any specific rewards such as Hero tokens, Celestial Evos, etc. Though the quick loot feature can save you a lot of time when trying to acquire a lot of Hero tokens, there is a trade off. Quick looting will not earn you any sparkly object loot (especially a trade off on Gold Island), gold dropped from enemies killed, or rewards from a Treasure Room (e.g.

Lupina tokens). Additionally, Heroes will not receive any XP, nor do you complete quest objectives requiring to kill specific enemies. However, quick looting does still give the player XP from completing the level. It is possible to quick loot the island dungones Boss Island (8x Loot Keys), Evo Island, Gold Island and XP Island to get the rewards like Totems, Evos, Gold and XP Potions, respectively). You can collect up to 10,000 Loot Keys and bank up to 10,000 stamina.

Upon logging in each time, you will receive a notification of any current events or special offers that are currently running. However, once dismissing this notification, you can view these updates again, by clicking on the update button. It provides information in regarding daily events that modifies game play or new deals for people to spend in the shop.

In addition, limited time events are featured, so that adventurers can quickly try them out. Keep an eye on the various events so that you can be in tune with what's new within the game. 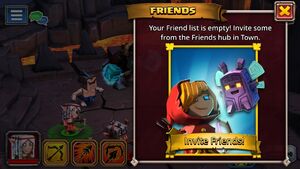 Friends provide the player an additional resource when fighting in a dungeon. Both the friend and the player receives

1x Loot Key when the champion is used in the dungeon. When the amount of Loot Keys exceeds the cap of 10,000 Loot Keys that player will get

Friends are added into your list by clicking on a name through the game play chat function or Guilds roster list, clicking invite, and then wait for them to accept your invitation. A confirmation that the both of you are friends is through an in-game mail.

Heroes makes up the entire force of your party, to help and aid you in difficult dungeons. You can make them stronger by leveling up their various abilities or by leveling up the hero by collecting hero tokens, both which requires time and dedication. See this page for more details on the heroes that you can achieve.

You collect new heroes through the Portal tab. See the Portal section below for more information.

My Dungeon, unlocked at level 10, provides another experience for the player to pit their heroes against other players in a PvP (Peer vs Peer) match. The player can earn trophies (used to in tournaments), honor scrolls, and gold. 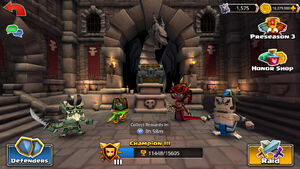 In additional to using honor scrolls for an honor summon in the portal tab, you can also spend them in the Honor Shop accessible through your dungeon. Here you can spend your collected Honor scrolls for Hero Tokens, gold, Loot Keys and XP Potions. Read more about it on the Shop page.

The leaderboard provides information on the ranking of players that participate in PVP raiding and defending. It includes information on remaining time for the specific PvP bracket, as well as the rewards given away at the end of the bracket.

Raiding is this game's terminology for PvP battles. A raid consists of an attacker's team of four heroes against the defender's team of four heroes. The reward for a successful raid is a variable amount of gold, trophies, and honor scrolls. The little red number on My Dungeon tells you how many raid tickets you have. Visit the Dungeon Raid section of the wiki to learn more about raiding.

Your gold storage and gold protection rate is increased through the use of hammers collected in the game. Hammers can be collected primarily through the completion of dungeons and quests. Once you collect enough Hammers, you can choose to either increase your gold collection amount or your gold protection amount. Improving your gold collection will yield you more gold each hour, while gold protection will prevent opposing players from stealing as much gold from your during raids. Each time that you level up one of these factors, the Hammer cost increases in order to acquire the next level.

Evos, etc. There are 2 different types of summons:

10,000 gold and typically yield a few small items at a time such as XP and health potions, Evo Larva. Sometimes it unlocks a Bronze Hero or its tokens. There is a discount of 10% when you do 10x summons at once for 90,000 gold.

300 gems and can yield you hero unlocks and tokens to raise their star rating. Alternatively, you can use free Herioc Summons that you have earned from quests. Heroic summons can unlock rare Gold Heroes and Legendary Heroes, or earn you a number of hero tokens for Heroes that you have already unlocked. These are overall the best type of summons, but are completely unpredictable as to what prize you will receive. Look for featured Heroes and increased drop rates.

For a complete detailed description of what prizes you can earn from each summon type, please visit the Portal page.

In addition to completing dungeons, there are quests available for the adventurer to complete as an incentive to replay earlier levels. Daily quests provide a constant source of experience, gold, gems, and hammers. Try to complete as many daily quests as possible to continue to earn rewards each day. In addition, there are one time completion quests that are treated more like achievements and that over time, the player will eventually complete those.

The rewards button provide an incentive for players who play the game each day. It's important to know that the quests, dungeon levels, and daily rewards all refresh at Midnight. See the rewards page of the wiki for a more detailed look on daily rewards, boss treasure chests, and other goodies.

See Daily Rewards for a list of prizes that can be claimed.

There are three shops in the game. The Shop (hometown), the Honor Shop (in My Dungeon) and the PWN Shop (in the PWNage Tower). Visit the shop on details of what can be purchased with gems, honor scrolls, and cash.

In addition, sometimes special bundle offers are located in its own separate tab underneath the Events tab with a 24 hours countdown. 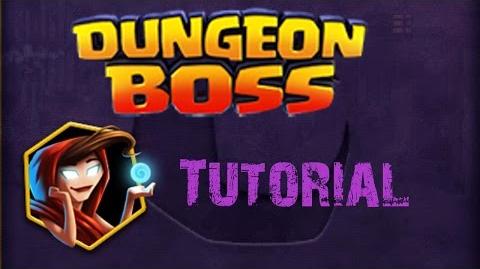 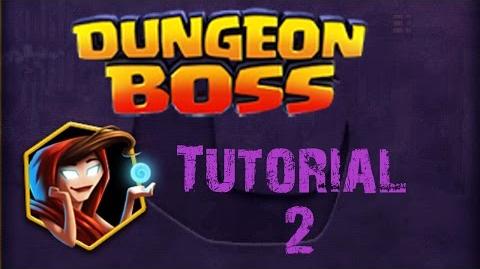