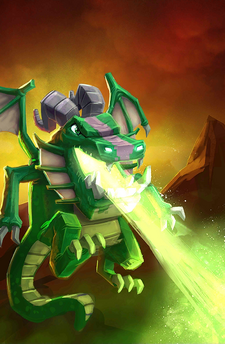 Ferno arrived in the VIP Portal, roosting there for a while, on 2017-06-29 during the "Enter the Ferno!" event. He is the 74th hero and first Dragon in Dungeon Boss. It was possible to earn over 100 tokens of Ferno to unlock him during the event. Ferno was the new VIP hero at that time.

Julius found an abandoned green egg where the forest and the desert meet. He brought the egg to his jungle sanctuary and protected it with care. One day a vicious fire ravaged the forest and

Julius lost the egg in the chaos. When the fire died out, Julius was relieved to find the egg unharmed. Suddenly, the egg started to hatch, and a young dragon whelp was born.

Ferno felt at home in the forest, his capacity for destruction proved troublesome for the other woodland creatures. He was too young to control his wildfire breath and

Julius had his hands full caring for the reckless baby dragon.

Ferno started to mature, he decided to leave the forest in search of others like him and a less flammable home.

The Dragon Whelp left the forest in search of others like him and to find a new home where his destructive capabilities wouldn't be such a burden. Whelp found friends in other flying heroes,

Torchy who shared the Whelps capacity for fire, and

Bauble who is immune to being burned.

Ferno has gotten a bit of a rework in October 2019: