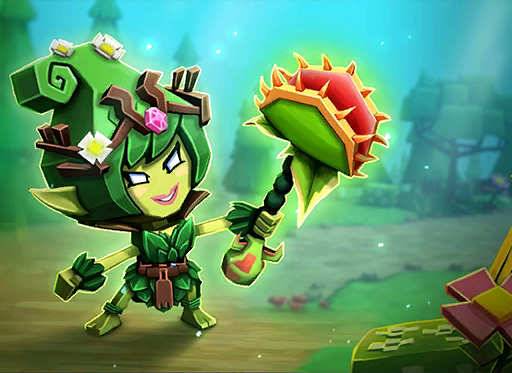 An Epic is a special, unique epic gear. It can be a weapon or armor. It's individual and tailor-made for every Hero. Epic Heroes have already found or forged their Epic. Indeed, as of now, not every Hero in the game has already discovered their Epic.

New Epics are released every few weeks for Heroes without an Epic and can be looted on Boss Island. Epics consists of 3 parts that are hidden there. You need these parts to unlock and fully level up the Epic.

The unlocked Epic changes the appearance of the hero's weapon, or the hero's appearance (for example armor) when they use no weapon. A

silver skull is shown on the top of the Epic Hero's portrait.

How to Get an Epic

There are 5 dungeons on Boss Island. One for each Element. If a Hero has already discovered their Epic you can unlocked it once you have fully ascended that hero and if that hero is level 50 or higher. You need to find the first part of the Epic to unlock it. The other two parts are needed to level it up. They are needed at Epic level 6 and level 12, respectively. To be able to loot part 2 and 3 of the Epic Player Level 60+ is required.

By taking the hero to their elementally respective Boss Island Dungeon (for example,

Fire Heroes search in the Lava Academy dungeon) and beating said dungeon, the hero's Epic may drop. It may take several runs to drop. Then, within the hero's "Epic" menu, you can apply the epic to the hero, using raw and crafted Materials and the epic itself.

Epics allow your hero to gain boosted stats, and a special effect when using a basic attack. An successful Epic attack deals multiplied damage vs the target, and often has an effect that cleanse or buffs allies, debuffs the enemy team/target, or purges enemies' buffs, etc.

Legendary Heroes gain an improved Trait from their Epic, a truely Epic Passive.

Upgrading Epics requires Totems and Raw Materials. As the levels upgraded progress higher and higher, more materials will be needed.

The Epic boosts three stats of the hero, for example: Attack, Health, and Skill. The boosts are displayed in the hero's profile when you tap & hold a stat value. CRIT chance is always a secondary stat and half of that percentage. Maximal +10% at level 12, that is.

There are a few special Runes, rewarded by participating in events, with a special 4th stat that increases the chance to fire the effect of an Epic. The chances of these Runes stack, and can guarantee the Epic effect on a basic attack.

Impaired caused by his

Combat Prowess. It'S a direct counter to

Exceptional Arsenal that increases the chance for an Epic attack.