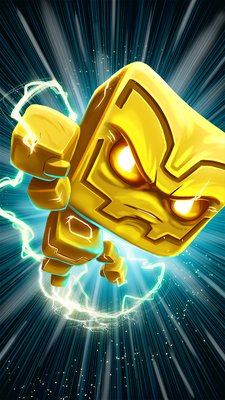 Gradually increasing both Ekko's stars and Ascension will improve him more as a character. Eventually ascending him will turn him from a solid team buffer to a team buffer and powerful damage dealer, able to one shot most PvP enemies.

Ekko's role in a team is partly to deal damage, but more importantly to give huge team buffs.

Ekko has a number of unique and helpful traits that improve him as a character.

First off he has

Light Immune. This makes him completely immune to many attacks, such as

Chief NubNub's basic attack and all of

Jin Lei's attacks. Frankly it's a huge bonus, particularly to Casters and Healers, the majority of which are unable to harm Ekko at all without use of particular special powers.

Team Energy Vault, which gives your whole team a guaranteed 100% chance to resist energy drain (=immunity). Energy is neede to use special attacks. This effects

Ignus the Mad who can steal energy.

Magical I (25% damage reduction from magical attacks) and

Ethereal. This grants him another 20% damage reduction and protects him from killing blows in the first round. However shield-piercing attacks can still kill Ekko immediately, and debuffs like

Poisoned can kill him at the end of round one when the shield wears off and the damage of the debuff is dealt.

Energize is one of the best team buffing powers in the game. It does three helpful things. It gives your whole team

Shocked. CRIT up is immensely helpful and if combined with a powerful one shot character or an AOE character, it can result in an enemy team or a boss being devestated by immense amounts of CRITS. Just watch out for opposing elements. And the +2 energy gives the whole team +2 energy to their powers on cool down. Likewise, if at the start of a Dungeon, energize can be used to quickly gain the player access to all their abilities.

Electrical Storm is an effective power if used in the right situations. It deals 2 kind of damages. It's direct Lightning damage to all targets hit. The amount of this damage depends on Ekko's Attack stat. Additionally there is a good chance to shock the targets. When an shocked enemy is hit again the

Shocked debuff will deal damage to the target's allies. The amount of this damage depends on Ekko's Skill stat.

Electrical Storm is best used when Ekko is fully ascended, to give him a target for

Shock is ineffective vs enemies immune to shock for 2 reasons: First they can't be shocked (debuff is not applied), and second they take no damage from other shocked enemies. You will see "0 damage" popping up in that case. For example

Archangel Emily and all Constructs are

Shock Immune due their traits.

Intensify Shock is Ekko's ticket to becoming a full time damage dealer. Ekko already hits pretty hard, and dealing x3 damage on a shocked target will result in a powerful swing. In addition, if he is energized, he is also almost guaranteed to get a CRIT. Combining all of these together nearly certainly results in a dead target. This power is also very effective on Tsume. As well as most likely one shotting the dreaded demon, the shocked hits all enemies in the area. As shocked attacks technically count as the person who was shocked attacking their allies, killing Tsume means his whole team will suffer from a shocked attack with the bonus of maximum Savage Fury. This often results in the whole enemy team either dead or critically wounded.

Ekko's Energize will help any character, but the CRIT up with benefit people in particular who give Debuffs with CRITS. Lupina's Grill Master or Alexandros's Shocking Touch are all good examples of this.

Black Diamond's Light Crusader helps Ekko have an even higher CRIT chance, as well as any other Light Heroes on the team.

As a general rule, Ekko's Energize will really help any hero in the game.

Ekko is a very under-appreciated character in PvP. Mainly because he is a fantastic counter for many of the more popular characters in PvP. As explained before, he is one of the best counters for Bovus and also the most reliable and at full ascension can counter Tsume well. Also, thanks to Spirit and Lighting Immune, Ekko is completely immune to Pontifex Mortis and NubNub, another two feared characters in PvP. As a result, Ekko is a fantastic addition to take on any PvP team. His one weakness in PvP is his low health, however the new buff, Heroes Revamped!, Ekko also has increased health, making him even more powerful. I

Raid tip: Use Ekko when you see

Chief NubNub on the opposing team, since NubNub's attack is a spirit attack. Ekko is

Spirit Immune. Also, take advantage of this ability when facing casters, since many have spirit attacks.

Ekko is immune to be

Community content is available under CC-BY-SA unless otherwise noted.