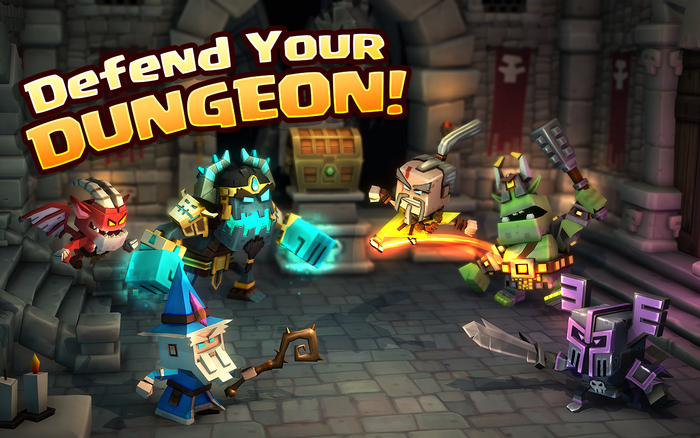 Dungeon raids provide the means to fight against other heroes. Winning raids will reward the adventurer

trophies (used to determine what league you are in),

Honor, and other goodies.

Each person starts off with eight

raid tickets, and you get a new ticket every 2 hours. The number of raiding tickets available is shown on the My Dungeon tab in the town hub. 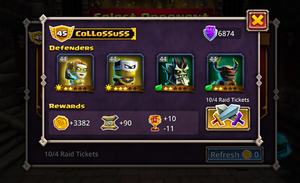 Upon clicking raid, you'll have a selection of three opponents to choose from. The power level of each player is an estimate of how tough they will be in battle. The three opponents that you can choose from have increasing power levels from left to right (so the leftmost opponent has the lowest power level, while the rightmost has the highest). Clicking each of them will reveal the makeup of their team as well as the characters' individual levels (as displayed here). The number in brackets (xxxx) is the

Rune Power. You can examine each defender's rune when you tap and hold them. Additionally, the amount of gold,

trophies that you will win from that player are also displayed while reviewing the player's team.

If the opponents that you are matched with seem too tough or unworthy of your time, you can spend gold to shuffle and receive a new set of opponents to choose from. In addition, you can also spend

Aether to refill your

raid tickets. The cost of gems and gold required to refresh these features increases with the frequency in which you use them.

See, the following sections for more details about selecting an appropriate team and an overview of the battle system.

Choosing the right team for battle is crucial. There are several factors to consider when selecting your team: 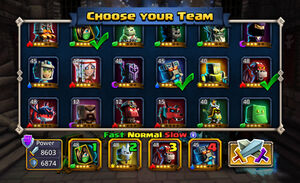 Speed is an important factor when choosing a team because characters assign attacks based on speed levels. Your opponent's characters will always attack first, but attacks alternate by speed rating as follows:

This is important to know so that you can choose an effective team. If an opponent has a team of all fast or normal speed heroes, but you use a team of only normal and slow speed heroes, there is a likely possibility that all of your heroes will die before you get to declare a single attack. Additionally, heroes who share the same speed rating will attack in the the order in which they are selected for your party. For example, if you select

Willow Swift first and then

From time to time, the game will offer incentives for using a specified type of hero. These incentives vary, but can give your team a slight boost during battles.

Additionally, it's important to consider the passive traits of a Hero before going into battle. For example,

Overlord Executum has the passive trait of boosting the defense of all undead allies, which could be useful if you have a team of undead heroes. Other heroes have a higher chance to dodge attacks, which may help ensure their survival. Some heroes have boosted damage against slow heroes. The list goes on, but there are many wonderful traits that heroes can posses that greatly impact gameplay. Research these traits to help yourself become and even better raider! 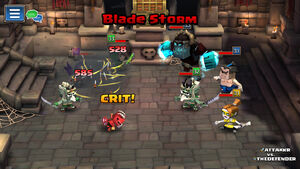 Once a battle begins, heroes will attack based on the their speed rating. Please see the "Speed" section above for more detailed information about speed ratings. Your objective is to take defeat the opponent's heroes before they defeat your last hero.

It's important to note, that PvP battles do not allow you to use any items or friend's allies during battle. You are restricted to only the four heroes that you select.

How to Set Up a Defense?

It's no easy to give an advice which of your heroes build the best defense. In the very early phase of the game most players will use the New Boss' Heroes they unlocked from the tutorial quests. Lucky players who unlocked Gold Heroes or Legendary Heroes from Portal will let them defend their Dungeon because these heroes get a stat boost from the Hero Rarity. The drawback is that Gold and Legendary often have only 1 star while

Later in the game (in terms of total roster power and levels) Hero Stars, Ascensions, Runes and Epics will be more important.

Retrieved from "https://dungeonboss.fandom.com/wiki/Dungeon_Raid?oldid=24159"
Community content is available under CC-BY-SA unless otherwise noted.