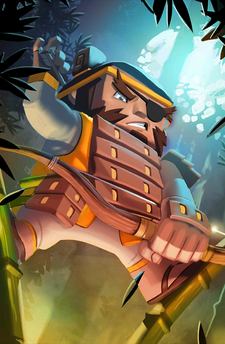 Deadeye has yet to discover their Epic.

The following heroes benefit from

Sun-tipped Arrows trait when on team with Deadeye and use the listed attack (Ranged, Physical). Their attacks will have a purge on hit effect. The same allies can also benefit from

Pyrojectiles and burn the target.

Allies with a Ranged, Physical basic attack will join Deadeye's

Bring It Down! attack.


The following attacks are Ranged and do Physical damage:

Deadeye seems to have been inspired by Deadshot, from DC Comics. Deadeye and Deadshot seem to share many similarities other than the fact that Deadeye prefers to use a bow over a modern ranged weapon.

Deadeye has a thirst for adventure
Community content is available under CC-BY-SA unless otherwise noted.
Advertisement