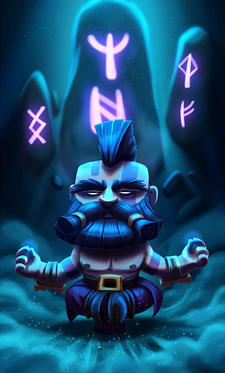 Using blueprints given to him by a dear friend,

Dagrund Blacksmoke has just finished forging his Epic, a mace with the power to both hurt his enemies and heal his allies!

Dagrund's Epic increases his defense, attack, and crit chance. During an Epic Attack, he does 3x base damage, and then lifesteals for all allies.

In addition, the following changes had been made to Dagrund on July 4, 2017. These are separate from his Epic.

Bauble are the only Heroes that can repair Constructs.

Energy Rune cannot be used on Constructs, except