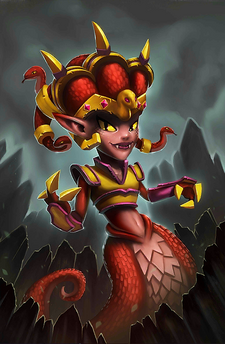 The ancient rulers of the land,

Viperia have come through the portal on 27th April 2016 during the Gorgon Sisters event. Some years later

Admiral Kreel use Venom as well to boost damage and to reduce damage.

Cobressa can benefit from her

Garden Redecorator trait for one attack. If she is hasted she can attack the Statue another time. Viperia will benefit from the Stoned debuff as her passive

Viper Gang, and her high skill stat. Because this self buff counts to her cap of 50% crit maximum, the CRIT chance cannot boosted even further by Runes.

Cobressa in every way being immune to her deadly ways yet she cannot help but appreciate fine craftsmanship even if it is in a hated enemy.

The Gorgon Sisters Event: How to beat "Gorgon Lair (VH)"