Chilled - Stops the cooldown of Special attacks for 3 turns. 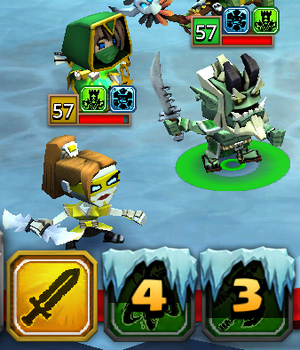 The effect is noticed by a brief shimmering blue aura around the target. Abilties are frosted over, signifying that those skills do not regain energy for the duration of the Chill. Chilled abilities not on cooldown could be executed for that one time, but subsequent turns will not regain energy.

However, energy can still be obtained through

The following heroes can inflict/apply Chilled:

Snowy Smash (Basic Attack): A Basic Melee Physical attack with a chance to Chill, Frostbite if target is Chilled, or Freeze if target is Frostbitten.

Chilling Barrage (Special Attack): Ranged Physical attack on all enemies with a chance to Chill.

Chilled to the Bone (Trait): Self and Undead allies have a chance to Chill on Basic Attacks.

Wand of the Winds (Epic): Chance to deal 3x damage and inflict Freeze, Chill, or Frostbite, then enters his Ice Block.

The following heroes are immune to Chilled:

Cold as Death (Trait): Cannot be Frozen, Chilled, or Frostbitten.
Retrieved from "https://dungeonboss.fandom.com/wiki/Chilled?oldid=27592"
Community content is available under CC-BY-SA unless otherwise noted.