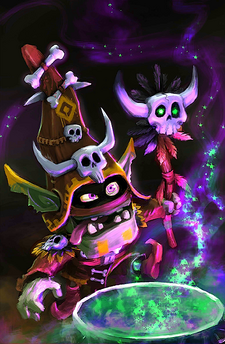 Chief NubNub is one of the healers with a low token unlock and early token availability, making him a useful hero for new adventurers. For those who do not want to use Yasmin Bloom as their primary healer, Chief NubNub is a very strong alternative.

His abilities involve strengthening his entire party with positive status effects like increased attack, defense, or critical hit chances and focusing on playing an offensive role. His healing abilities are geared towards healing the entire party over several turns while attacking the enemy and triggering Team Mend, a passive ability that heals the entire party upon a critical hit. With his healing focused on healing damage spread out over many party members, he works best in a team without a traditional tank.

Voodoo Chant heals the entire party slowly over time. In other words, it's a heal and forget spell so that Chief Nub Nub can use his available turns to cast other buffs or attack specific enemies. Voodoo chant also adds an increased chance to land a critical hit, which benefit other heroes that rely on landing critical hits (such as IGOROK's Polar Master, Shadowblade's Plague Spreader or his own Team Mend passive ability.) Part of the heal is activated when cast, and then heals again at the end of the turn. This is utilized efficiently when multiple team members are injured, and that healing them should begin at around 50% life to get the full benefit of the heal. Beware that this status effect can be removed by an enemy's purging attack, and that by removing the status effect will end the heal prematurely.

Stout Team provides an edge for heroes by increasing their survivability and damage output with an increased ATK and DEF. This is an essential skill in dealing with hard hitting enemies like bosses or other PvP matches. The increased defense helps Chief NubNub with healing duties by reducing the amount Voodoo Chant has to heal over time. It also speeds up the damage that your team can deal so that healing does not get drawn out. By spreading out the abilities between Voodoo Chant and Stout Team, you can keep your party from taking significant damage, and ultimately allowing Chief NubNub to strategically use these spells when necessary. In addition, the extra benefit of using Stout Team on Nature allies makes him a strong addition in an all Nature team.

Haste Ally provides a single ally an additional action following its normal action on the next turn. By strategically casting it on an ally, it gains an additional chance to unleash all of its devastating attacks on the opposing team. For example, Chief NubNub can cast Haste Ally on Squinch. When it is his turn, Squinch can cast Playing with Fire, which will attempt to inflict Burn status effects on the entire enemy team while buffing his team with the Pyromaniac buff. He can then follow up with either Cheap Shot for a quick kill, or use Burning Chop to reapply the burning effect on a different target. To increase the likelihood that the ally survives until its next turn, its Dodge chance is temporarily increased.

Chief Nub Nub's Stout Team increases its effectiveness by 2x with other Nature allies. If your team consists of other Nature based passives such as Willow Swift's Nature Heart (Health boosted by 15%), Tsume's Nature fury (increased attack by 15%), Rocky (increased CRIT by up to 20%) or Bovus (increased health), you can easily integrate him into a strong team.

Chief Nub Nub is also classified as a Goblin, and so heroes like Cruel King Bramble, Squinch, and Zurk can all benefit from his Goblin passive Tribal Heart (increased health by up to 25%). Cruel King Bramble increases ATK, CRIT and SKILL with his Tribal Leader and Goblin Crusade passives, respectively. With an all goblin team, you as an adventurer will enjoy the positive experiences with passives crossing between each goblin within that team.

Chief NubNub works well in a team composition of high health and defense teams. Using him in a team requires a mindset that your party members will outlive the others. The priority of hero selection should be heroes that can take a couple of hits. Bovus El Doro not only has a significant amount of life and defense, but his special also delays the entire enemies party by 1 turn, forcing them to use their special attacks one turn later. His Nature status will also benefit from an enhanced Stout Team. Including in this list is Cruel King Bramble. The Chief NubNub/Cruel King Bramble battery ensures that they will not be as easy to defeat due to passively increased health, attack and defense.

The benefit of using him is that Dazed effects do not affect the accuracy of his healing abilities. Therefore, Yokozuna or Lady Nimriel will most likely not be a problem for your team if you can still heal at the end of the turn. When raiding with Chief NubNub, be sure that you have a way to keep Chief NubNub from being killed or being locked out from using his attack. For example, an enemy team with IGOROK or Selwyn the Enduring will most likely Freeze your Chief NubNub. You will need heroes that can focus on taking him out first or else your healer will not keep your heroes alive.

When using him to defend your dungeon, you will eventually find many teams using Fast heroes to neutralize either Chief NubNub's ability to heal or some of your other hard hitting heroes, leaving your team crippled in terms of damage output. You may want to adjust your composition to either increase the life total of Chief NubNub or put in Heroes like Yokozuna (increases your teams' defense and reduces enemies' accuracy simultaneously). You can also add in Willow Swift, as she will surely increase your team's survivabililty and will become an advantage should your enemies leave her unchecked. If you have Julius on your team, then his presence will certainly change the tide of your battles. With his increased damage output at full health, Chief NubNub can essentially keep him at full life for multiple turns.