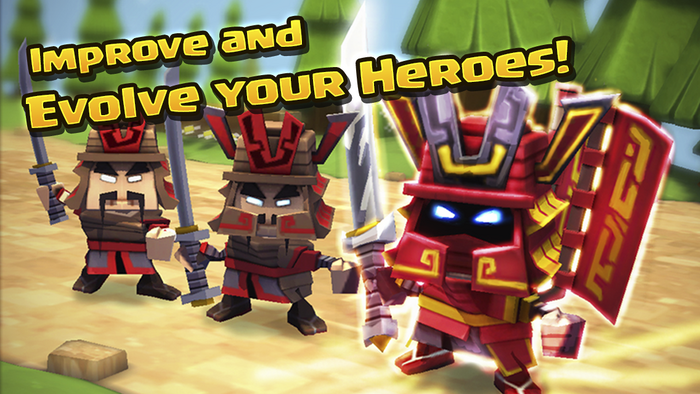 Ascension is the main mechanic of the game that creates stronger Heroes through materials gathered from dungeons and treasure chests. For each ascension level, the hero gains a new look, increased stats, and unlocked abilities. 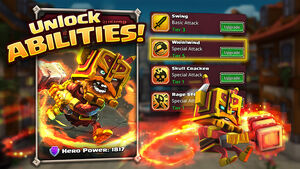 All materials for ascension are found in Dungeons, that means all kind and colors of Evos. By repeating specific dungeons, you can acquire rare Celestial Evos that can be used towards the hero's next ascension.

But there are more places where you can find Evos:
Visit Evo Island (Monday to Friday). It's good place to hunt for all kinds of Evos.

The Gem Shop and the PWN Shop offer now and then rare Evos for sale. You used to be able to get celestial Evos from the portal but that was removed in the New Portal Update (Feb-2019). Now you can only get Heroes from a Heroic Summon, and common items, Hero tokens and Evos from a great summon.

And with some gold and gems you even can combine Evos get exact the Evo you are looking for!

The location for ascending a hero is found in the hero's tab, under the option Ascend. The top portion of the tab describes the abilities and Traits (Passives) that will be unlocked upon ascending the hero. A new icon and look will also replace its existing appearance.

The ability descriptions can be highlighted by tapping and holding onto the icon until its infobox shows up.

The center of the tab describes the type of Evos and its quantities required to ascend this hero. A progress bar indicates how close that hero is towards ascension.

Clicking on those Evo icons brings list of that Evo's location in the Campaign, its

Stamina requirements to enter that dungeon, the Hero Tokens that can be claimed, as well as other Heroes that can use the Evo. Higher leveled Dungeons will be locked and greyed out if the player has not unlocked the level.

Once the requirements for ascension are satisfied, the Ascend button will be highlighted and the hero undergoes a transformation. A new skill at tier 1 is added under the abilities tab, and the hero gains a new look. In addition, if passive abilities were gained, it would be located under the Stats tab. Stronger versions of itself would replace existing versions upon ascension.

See Combining Evos for a detailed explanation on how to create rare Celestial Evos from materials collected in dungeons or visit one of the Shops to buy the needed one. Evo Island is also a good source for rare Evos.

The amount of stat increase upon ascending is variable from hero to hero. To demonstrate the increase, we'll have

Selwyn the Enduring be the test subject. 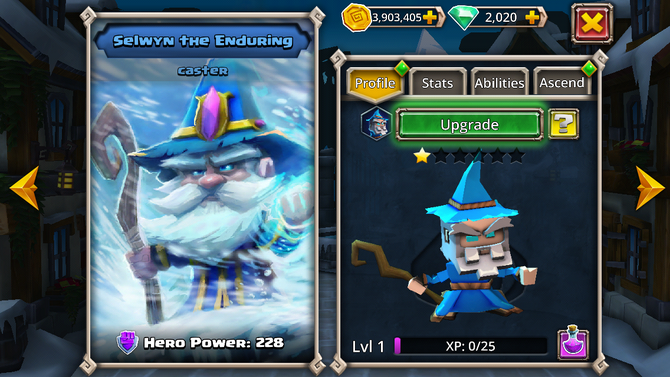 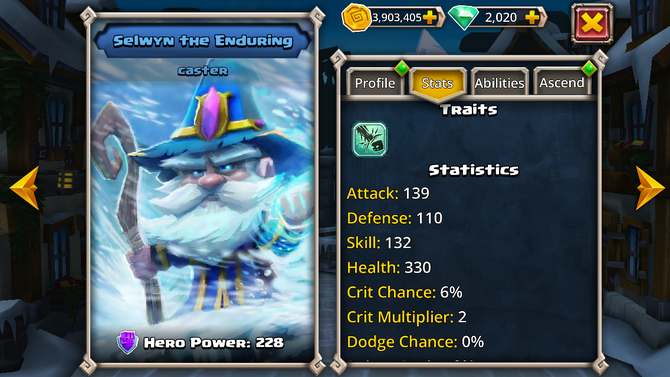 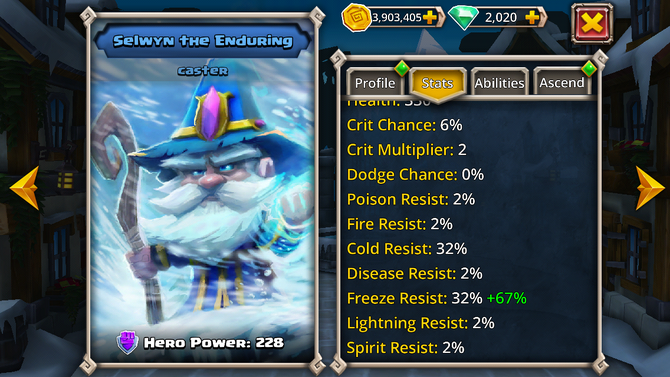 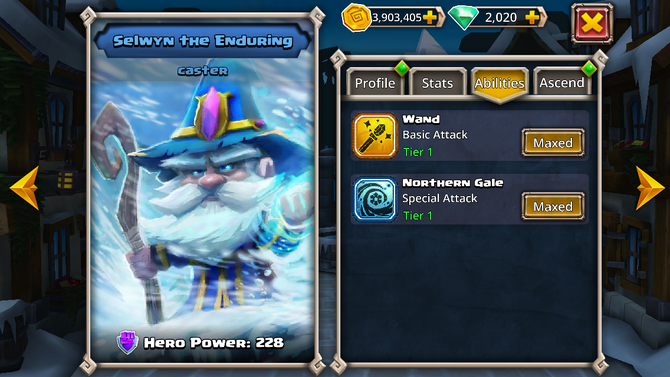 Selwyn base stats and traits

Based on the images above, you will see that his appearance, his power level and his skills are untouched during this time. After heading over to the ascend tab, you will see the following images. 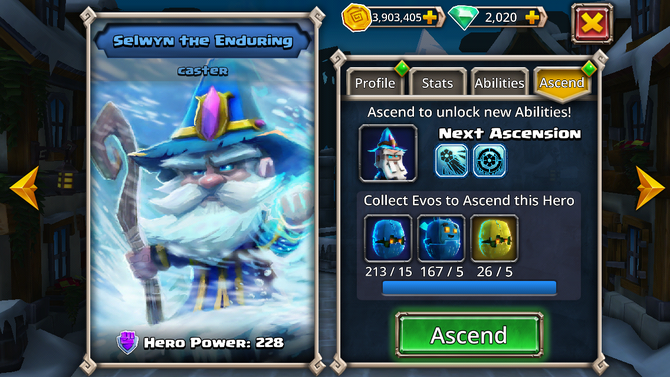 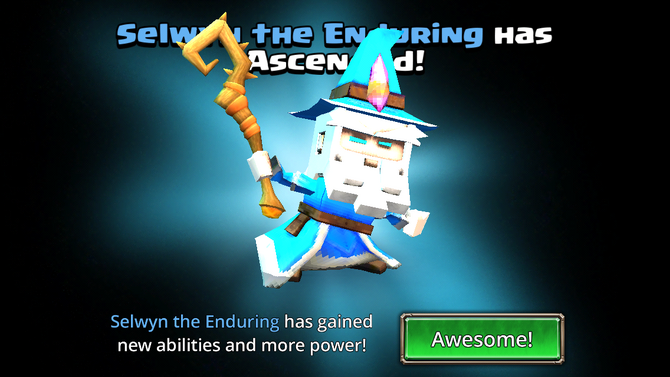 Ascending him will give him a new image, new abilities and new stat increases. Note that the stat increase within the profile tab will not reflect that change immediately, and that you will need to either enter a dungeon or log back into the game again to see the bonus effects. 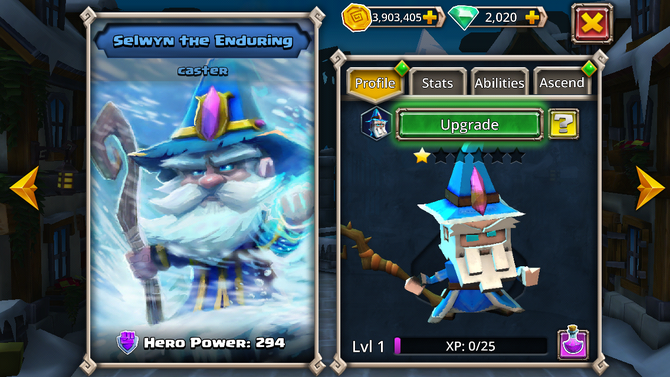 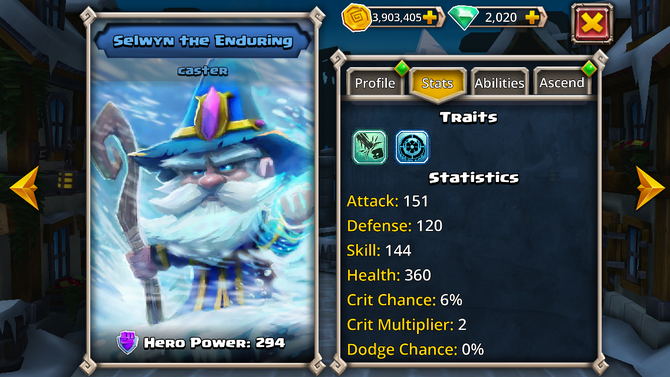 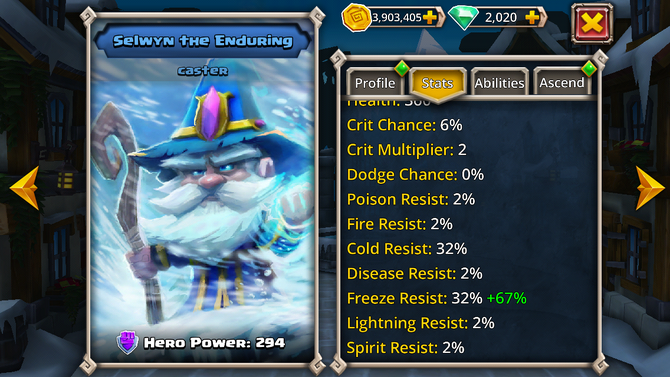 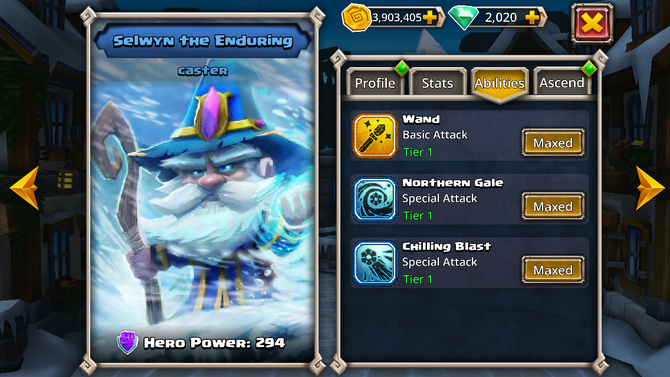 After the ascension, you will see an increase across the stat board. To summarize the stat changes, here's the following table with the relevant information. The percent gain is calulated by taking the ascended value dividing it by the base value multiplied by 100, then rounding it to the nearest whole number. Since Selwyn's level is at 1, the amount of resistances gained from ascending is too small to see.

Every Ascension requires a certain amount and kind of Evos. Celestial Evos are rare and hard to find. Eight kind of these are really rare. All kind of Evos are sold at the Ascension tab (Hero's profil) for

10, 20, 40, 500 or 800 gems, depending on the Evo type. The rare Celestial Evos are the most expensives. The following table is calculates a score for each Ascension on basis of the gem prices for the needed Evos. That way you can see which Heroes are easy to ascend and which ones are hard to ascend because they need more Evos, somtimes many more rare Celestial Evos than other Heroes need.

The table displays the hypothetical amount of gems needed to buy all the required Celestial Evos from the Shop. The higher the value is (=more rare Evos are needed) the harder that hero is to ascend and the longer it can take. A value lower than 500 most likely means that there are no Celestial Evos needed for that Ascension.

NOTE: The values are hypothetical and for comparison only. You don't have to spend gems to get all these Evos. You can hunt Evos, buy them in the PWN Shop for

Pwnage Points, combine them, find them on Evo Island and in

Great Portal Summons, and get them as quest rewards during Events.

The calculation is: Sum of (number of evos * shop price)